If you’re bad at something, should you still do it?

I’ve never been good at running.

Sure, I’m good at making myself run, at getting my butt out the door for a morning jog. That’s because running makes me feel good, keeps me healthy and helps me relieve stress. Plus, I do some of my best thinking while pounding the pavement or the trails. I'm the tortoise. Not so much the hare. (Photo by N. Hewson)

But the act of running itself is not my forte. I’ve always been slow. In high school, my friends on the softball team used to make fun of me (lovingly) for moving at a snail’s pace around the bases. Until, that is, I joined the field hockey team during my senior year and ran several miles a day. That spring, when our softball coach made us run a three-miler, I kicked everyone’s butts.

When it came to sprinting, of course, I was still slow. Yet over the last decade, I’ve continued to run. My sister and I ran our first –and probably last — marathon in 2005, the Marine Corps Marathon in D.C. I run the Freihofer’s 5K Race for Women every summer I’m home. And I love running the water-line trail near my house, getting into the woods and enjoying the silence.

But during the last six months, as I trained for the Rock ‘n’ Roll Virginia Beach Half-Marathon, I found running to be less enjoyable. More difficult. Like I was dragging myself to log miles. I don’t know whether that’s because I’m about to turn 30, or because it’s been two-and-a-half years since my last half-marathon. I’m not in worse shape than last time I trained for a 13.1-miler, and I don’t have any more weight on me. But whenever I looked at my watch, my pace was significantly slower than it should’ve been.

Years ago, I aimed to finish a half-marathon in 2 hours, 15 minutes. For those of you who don’t know where that falls on the running spectrum, it’s pretty slow, about a 10:15 pace. But this time around, during my training runs, I was going even slower than that. Every time I finished a run, I’d feel disappointed in myself. Which kind of defeated the purpose of running. Because if it wasn’t making me feel good about myself, why do it?

Then I realized something: maybe I needed to readjust my expectations. Maybe I needed to expect to take longer, so I wouldn’t be disappointed when I did. Who cares if 13.1 miles takes me 20 minutes longer than it did three years ago? I’m still running a half-marathon, right?

So last weekend was the race. As expected, I set a personal record, but not the kind I wanted. I ran my slowest time ever, by far.

But barely finishing is still finishing. Each of us is good at certain things, and not so good at others. And just because I’m not great at something doesn’t mean I shouldn’t do it. Maybe it means the opposite, that I should continue to try, because understanding what it feels like to fail and readjust expectations and be at the back of the pack gives me character. It also helps me appreciate those things I am good at. 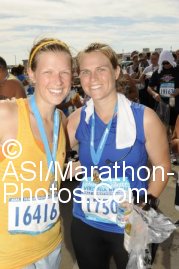 At the finish line.

Is there anything you do that you’re not good at? Or do you avoid the stuff in life that feels more like a challenge than an accomplishment? Can you see a benefit to powering through?

13 Replies to “If you’re bad at something, should you still do it?”

Thanks to Non-Conformity, I'm giving up bridal showers