When do you do your best thinking?

I do my best thinking while running.

(Outside, anyhow. While running inside I just think about how much I hate the treadmill.) 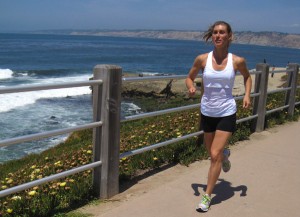 No, that's not me. I just like the scenery. (Photo by Flickr's Luluemon Athletica)

Why is running such a thought-producer for me? I think it’s because my mind has complete freedom while I’m putting one foot in front of the other. Freedom from all the things I’m obligated to think about during the rest of the day: work, communicating, remembering to do this and that. While running, I don’t have to think about any of those things. I can let my mind wander, uninterrupted, giving my ideas the opportunity to grow and multiply and morph into something bigger and better.

Sometimes, while running, I write in my head. I write full phrases, revising them until they’re just right, and then repeat them over and over until I’m back at home, where I dump all of those carefully constructed words onto my computer screen. Running is such a productive thinking and writing time that I wish my iPod had a recording function, one I could dictate my ideas into as I pounded the pavement.

Some people say they do their best thinking in the shower. Others like to think while traveling. I think well in each of these places, but running still takes the cake.

When do you do your best thinking? And how to you record those thoughts before they disappear?

18 Replies to “When do you do your best thinking?”

Add personality to your blog with social media icons