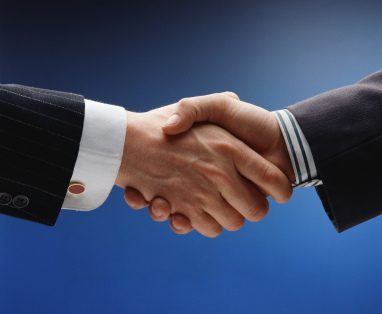 Why are handshake photos always of men who wear cuff links?

But the truth is, I don’t focus on it. The only effort I put into networking is attending in-person professional events or meet-ups where I don’t know anyone. I hate going to those, but I make myself do it every once in a while to meet new people.

What I do often do is reach out to interesting people I think I can learn from, and keep in touch after that initial communication. And that’s really what networking is at its core, right? But I don’t think of it like that. Which, as I write this post, I’m realizing is perhaps the real secret.

But you come here for practical information you can actually use, not to listen to me get philosophical about networking. So here are my tips:

1. Jump at opportunities to meet people. Every time a friend of a friend or a Twitter contact or a student wants to meet for coffee, I try my best to make it happen. Sometimes I’m busy, and it has to wait a few weeks. But I always get to it eventually. I figure if someone I’ve never met before is bold enough to suggest we chat in person, they’re probably interesting. And they almost always are.

When I was living at home, a woman wrote me an e-mail asking whether she might join a critique group I belonged to. She turned out to not be a good fit for the group, but since she was trying to break into freelance writing, I offered to meet her for coffee to help her brainstorm publications that might want her work. She agreed.

But a few days later, she wrote me another note, one that led me to believe she had Googled me, figured out I was in my late twenties, only a handful of years into my career, and decided she didn’t want my advice. I didn’t try to convince her — I figured she wasn’t worth my time — but know what I wanted to say? Lady, you missed out. Who cares that I’m younger and possibly less life-experienced than she is? I have contacts at publications — contacts that might have become her contacts if she had met up with me. Likewise, I know I have plenty to learn from smart people who are younger and less experienced than me. Every person has the potential to be the contact you need to break into your industry or move up the ladder of your career. Don’t pass up the opportunity to meet with them.

2. Create those opportunities. Don’t just wait for people to ask you out for coffee. Look for chances to connect. When you meet someone interesting, whether in person or online, initiate a one-on-one. When you read a good book, write the author an e-mail saying how much you liked it. I’m still surprised by how often authors reply, and occasionally those e-mail conversations turn into phone conversations or even in-person conversations.

If you think someone’s interesting, chances are they think you’re interesting, too. So get in touch. I love living in the age of the Internet because you can find contact information for just about anyone online.

3. Once you make a connection, keep it. Social media makes this easy. Meet someone interesting at a party? Look for them on Facebook or LinkedIn, depending on whether you want them in your circle of friends or your professional network. Check whether they’re on Twitter. If you can’t find them, write them an e-mail. Find a reason to get your e-mail in their address book.

4. Use social media strategically. Having a Facebook profile is no longer an advantage when it comes to networking; it’s a disadvantage if you don’t use it. Yeah, Facebook is for fun. But it will also help you get a job, or a tip if you’re a journalist, or a lead on a new apartment. Because if you’re on Facebook, you’re easy to find. And if you post even once in a while — just fun stuff about your life — your friends won’t forget about you. They’ll think of you when opportunities arise. For more on this, check out my post on how to use social media to look for a job. A lot of the strategies can be applied to general networking, too.

5. Look for ways to help others. What goes around comes around. But help others because you want to, not because you think you’ll get something from it.

Here’s an example: I volunteered for the Free Roxana (Saberi) campaign in ’08 because I wanted to help the Iranian-American journalist get out of jail in Iran. (I didn’t know her personally then, but I do now.) I tweeted for the campaign and organized a hunger strike. Months after Roxana was released, one of her friends who also worked on the campaign was so grateful for my help that he went out of his way to pass my resume to someone he knew at the organization where I wanted to work. (How’d he know I was looking for a job? He saw it on my Facebook status. See previous tip.)

Another example: A friend of a friend, Julie, who happens to have a hilarious blog, e-mailed me during my trip to Africa, asking for help planning her own career break. It wasn’t until months later, when I was back in the land of Internet that wasn’t slow as all hell, that I realized she was a published author. Not only that, but she had worked in publishing. (We have lots more in common, too, and became friends.) For months, until I grew my network of author types, Julie was the person I annoyed turned to whenever I had a question about the industry.

The world of journalism is small. The publishing world appears to work that way, too. So never burn bridges. Instead, go out of your way to do the exact opposite, to help someone out. Someday they might return the favor.

6. Use your school networks. We tend to forget about our college networks after we’re out of school for a few years. But I’d do anything for a graduate from Colby, where I earned my bachelor’s degree. And I’d help out someone simply because they went to Medill, too; that’s where I went to graduate school. Both of my alma maters have searchable databases I use to look up people, and yours probably does, too.

Case in point: When I was looking for a literary agent, I searched both alumni databases for graduates with that job title. And while those agents didn’t end up representing me, they did respond to my e-mails, unlike some of the other agents I queried. They cared about helping me because of that connection.

7. Ask questions. This comes naturally to me because I’m a journalist. And I always have a lot of questions because I’m super interested in how people got to where they are today. Everyone has a story, if you take the time to ask. And people like talking about themselves. They also like hanging out with acquaintances who make them feel good about what they’ve done. So the key is to ask questions that will help you learn, and ask them in a way that makes the person feel good about themselves.

8. Blog, blog, blog. Blogging is awesome for meeting people who share your interests. I couldn’t tell you how many fabulous people I’ve connected with through this blog! I love the community here.

This is a concept that non-bloggers often don’t understand. Why would I want to communicate in a virtual world rather than the real one? Because connections I make here, just like ones I cultivate on Twitter, have the potential to become real-world connections. You are all real people — real, interesting people. People with good ideas and your own networks. Which is why I help you and you help me, and it doesn’t feel like networking at all.

What networking tips can you add?