It’s never easy to pack for a long-haul trip. You want to pack as little as possible, yet also have everything you need. And the day before you leave, you always know you’re forgetting something. 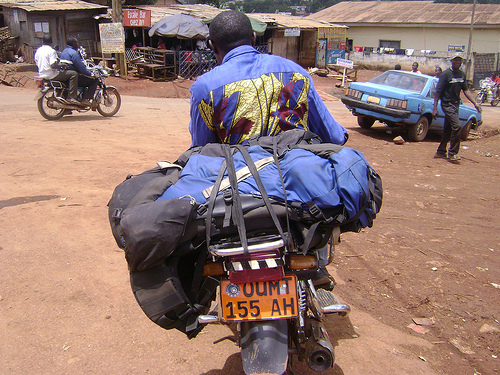 My pack strapped to the back of a motorcycle in Cameroon, just before I climb on.

That’s why I’m a fan of creating a packing list, or using one somebody else created (which reminds me that I need to post mine on this blog). But long-haul travelers — backpackers who plan to be on the road for more than, say, a month — have different needs than those going on short trips. And if you’re planning to hit at least one developing country, you’ll have a different list than those who stick to places with flushing toilets and reliable electricity.

I prefer traveling to developing countries, so my suggestions are most helpful for those doing the same. But some of these items will be useful even if you’re going to, say, Europe.

Here are 10 items long-haul travelers should consider adding to their packs:

1. Powered drink mix. Kool-Aid works, and so does Crystal Light. I’m talking about the single-serving packets, so you can easily add flavor to water by pouring the powder into a water bottle. If you end up somewhere without refrigerators and drink lukewarm water for days on end, you’ll bend over backwards for some flavor.

These can also make great gifts for kids or even adults. I pack them in a Ziploc bag, just in case I accidentally punch a hole in one; cherry powder is great to have inside your water bottle, but not so much coating everything in your backpack.

Don’t want to pack them? Make your own lemonade instead. Squeeze lemons into your water bottle, then add sugar to taste. Voila.

2. Plastic bowl and spoon. A spoon is more versatile than a fork, and a plastic bowl will come in handy for more than just eating. Because I ate a lot of street food during my trip to Africa — partly to keep costs down and partly because it’s more interesting — these were among the most-used items in my pack. It’s worth spending a few dollars at an outdoors stores to purchase a super lightweight bowl.

3. Batteries. They’re heavy, yes, but you’ll be glad you have them when your headlamp runs out of steam in the middle of a dark, night-time bush taxi ride. Quality batteries can be hard to find in some countries — and expensive — so it’s worth stashing a few from home in your pack.

If you don’t want to carry the weight, pay big bucks for batteries in packages that haven’t been opened. If you buy the cheap kind that’s sold on the street, they’ll likely only work for a few minutes, if they work at all. I made that mistake once (okay, two or three times), and won’t make it again.

4. Antibiotic ointment. Cuts tend to get infected easily when you’re away from home and surrounded by foreign germs, and the chances of infection increase dramatically in dusty villages that lack running water. Save yourself a trip to the local hospital by caring properly for even small wounds. Ointment like Bacitracin also come in handy with locals; I offered some of mine, for example, to a young Senegalese girl who’d burned her leg on a motorcycle.

5. Mini music speakers. I never thought I’d advise bringing speakers on a long-haul trip, especially for backpackers who have to carry what they pack. But as nice as it was to have my iPod while gallivanting around Africa, I wanted a way to share my music with other travelers and locals who hosted me in their homes. And during the rare instances when I had a private room, I wanted to chill out while listening to music — without headphones.

So when I was in South Africa, I bought a small pair of travel speakers, even though they cost what seemed like a fortune since I’d been living on about $35 a day. I made sure they ran off batteries and didn’t need to be plugged into an outlet, since most of the places where I was going didn’t have outlets. When you’re traveling budget-style, every little luxury makes a huge difference.

6. Address labels. I’m a huge fan of old-school mail, more sending than receiving. But who wants to carry an address book while traveling? Instead, I printed addresses on sticky labels that I could easily attach to postcards when I wanted to check in with family or friends. The stickies were lighter than an address book and stored easily in my Folder of Important Stuff. As a side benefit, I knew I’d sent my quota of postcards to certain relatives when I ran out of labels with their address.

7. Flip-flops. I’m talking the cheap, flimsy kind. You’ll pat yourself on the back for carrying them every time you shower in a not-so-nice dorm bathroom or bucket-bathe in a cement room with just a drain on the floor. Flip-flops may be slightly awkward to pack, but they’re super light, which makes up for it.

8. Headlamp. I pack a headlamp even when I’m headed for a developed country with electricity and ceiling lights and street lamps. You simply never know when you might want it on the bus or even to find something in your pack when everyone in your hostel dorm room is asleep.

And when it comes to backpacking through undeveloped countries, a headlamp is a Must-Have. During my trip to Africa, I used my headlamp more than any other item in my pack: more than my toothbrush, even. I used it to brave outdoor, hole-in-the-ground toilets and to wade through water to board makeshift ferries in the dark and to cross unfamiliar villages after the sun went down. Don’t leave home without it.

9. Pocket knife. It might seem strange to pack a knife when you’re not going camping, but this will come in handy more times than you’ll be able to count. I used mine to cut up fruits like pineapples and mangoes, to spread cheese (I’ll never eat Laughing Cow again), to open tricky packaging and for the occasional odd task like prying open my cell phone to swap out the SIM card. Just make sure you pack the knife in your checked bag if you board a flight, so it’s not confiscated in the carry-on line.

10. Extra Ziploc bags. A good baggie can last months, but when it tears, you won’t easily find a replacement in some rural areas. These are so light and can be so easily crammed into a corner of your pack that there’s not excuse not to bring a few extras.

What item(s) in your travel pack can’t you live without?

Tell me this doesn't make your morning