Update: The winner of the book giveaway is Dean Miller. Dean, Chuck will send you your choice of the 2011 Guide to Literary Agents or Formatting & Submitting Your Manuscript. Congrats!

One of the best blogs around for writers is Chuck Sambuchino’s Guide to Literary Agents. (And I’m not just saying that because Chuck lets me write for him.)

So I’m tickled to have Chuck here today for a Q&A. He’s also giving away a book that’s likely to interest many of you; we’ll provide details at the end of this interview. 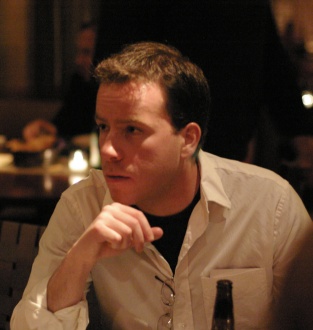 Chuck works for Writer’s Digest Books, editing — you guessed it — Guide to Literary Agents, as well as Children’s, Writer’s & Illustrator’s Market. He’s also written a humor book, How to Survive a Garden Gnome Attack, which was released in September.

Most of us know you as author of The Guide to Literary Agents blog. But give us a little background! What's your day job? How did you become an expert on literary agents?

It was 2006, and my career goals of winning the Iditarod and/or joining the Hell’s Angels had not worked out. I was working for a magazine at F+W Media, here in Cincinnati, when I became aware of another in-house job opening with Writer’s Digest Books editing the print resource, Guide to Literary Agents. I applied, got the job, and just transferred divisions (and cubicles). The current edition of GLA (2011) is my fourth edition as editor. The GLA blog was created to supplement the book. The book itself is a huge database of literary agents while the blog is lots of advice on submissions as well as interviews with agents. 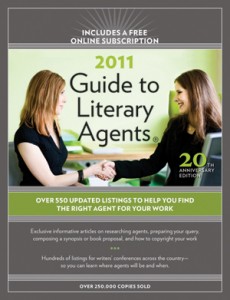 What's included in your book, 2011 Guide to Literary Agents, and why would my readers want to buy it? Also, do you update the book every year? How much effort does that take?

The majority of the book is filled with listings of literary agents — who they are, what categories they represent, how to submit to them, what titles they’ve sold, etc. (And yes, all listings are all indeed updated every edition.) The whole process takes several months, as does updating my other resource, the Children’s Writer’s & Illustrator’s Market. The 2012 edition will be my first as CWIM editor. As far as WHY writers should consider buying it, I could tell you, but I’d rather just show you. Look here for 15 quick testimonials from published writers who got an agent using GLA. And these 15 are just the tip of the iceberg.

And you recently came out with a book that has nothing to do with literary agents, right? Tell us about that.

It’s a humor book called How to Survive a Garden Gnome Attack, and it is the only guide that will teach you how to ward off and prevent an assault from these quickly proliferating and extremely dangerous lawn warriors. The book came out about eight months ago and the response so far has been phenomenal. A few weeks ago, we just got the insane news that Sony along with director Robert Zemeckis (Back to the Future) will option the film rights to the book. I actually saw my own name recently in places like Variety and The Hollywood Reporter. Surreal to say the least. It still hasn’t sunk in. When it does, my mind will explode. I still get chills when I watch George McFly punch out Biff in the parking lot in BTTF 1 — and to think that the guy behind THAT CAMERA may be helming a story somehow associated with me … it’s just too much to take in.

Your blog is crazy popular! How did you grow it to 140,000 page views each month? How is it different now than when you started blogging?

When it began almost four years ago, much like any other blog, it lacked a focus or regular frequency. But slowly, over the years, I’ve paid attention to what works vs. what doesn’t, and I’ve slowly shaped the blog into something that a lot of people can enjoy. I’ve started columns that can serve as series; I’ve put a lot of time into it; I’ve written a lot of e-mails to people for help for guest content; I’ve paid attention to how things look; I’ve never really abandoned it for more than a day or two; and I try to blend a variety of topics. When you blog, you must always keep one huge thing in mind: the reader must get something out of each post. People tend to blog about their own lives because that is the easiest thing to do. But those blogs go nowhere, usually, because the blog itself is for the writer, not the reader.

You now seem to rely heavily on guest posts. How do you find those people? Do they come to you?

Plenty do come to me, yes. And plenty more I go out and find. Whenever I see that someone has a book coming out, I will contact them and basically say, “Hi there. I got this big blog. If you’re interested in guest posting for some promo, consider me. If you want to know more, let me know and I’ll pass along guidelines.” A lot of people don’t write back, but tons do. And as the blog gets bigger, people’s incentive to guest post gets higher — and as more and more people guest post and their posts are archived, then the blog will grow bigger still, and that makes the incentive for the next round of guest posters even higher. It all feeds itself.

What types of guest posts do you look for? How should someone pitch you if they want to write a guest post for your blog?

The reason why I get so many guest posts is I am wide open on content. It can be new or reprinted. A column just has to be helpful content for people who write and/or are seeking an agent. If you’re interested in guest posting, write me at literaryagent@fwmedia.com.

How much time do you spend working on the blog each week? How has that benefited you?

My best guess is one hour a day, seven days a week — no exceptions. I have no underlings or staffers, so I have to do everything. I delete spam posts (sometimes up to 50 a day), I go back into old postings and correct errors, I add new posts, I contact prospective guest bloggers, I pick contest winners and pass their addresses on to publicists. It’s a lot of work, but the results are worth it. The end result is something ever writer should seek: a solid platform.

What's your No. 1 tip for writers working on query letters?

Seek out examples. I love a good article like “5 Query Letter Tips” as much as the next writer — but after reading several posts like that, my mind goes kind of numb. At the end of the day, I just want to see examples of queries that worked and examples of queries that didn’t. Let me see what worked and what failed, and I will figure it out for myself. This, in fact, was the impetus to create the “Successful Queries” series on my blog. I think we’re up to 53 or so of them now — real letters that got writers their agent. If you’re looking for examples of good queries, I highly suggest you check out these posted letters.

You often feature Q&As with new agents on your blog. Do you think writers are smart to pitch new agents? Can you recommend a few new agents who have impressed you lately?

New and newer agents are actively building their client list, so they are usually willing to give writers’ work a longer look. Sometimes people are wary about signing with a new agent because of their newness. My suggestion is this: If you have concerns, you can always bring them up if the agent calls. Ask tough questions. If you want to make sure they know plenty of editors, just ask them straight up: “What editors do you have in mind for the book? Have you worked with them before?” Make them make a case to you as to why they are an excellent choice to represent you. If you don’t like what they have to say, just decline their offer. I don’t have any new agents I’d like to single out, but if you are open to working with a new rep who’s looking for clients, see my entire list.

What other advice can you offer writers trying to find the literary agent that's right for them?

Keep the Faith (Copyright: Bon Jovi). Finding an agent is a difficult process, but a necessary one. Educate yourself, invest in yourself, and keep writing. And think about attending some writers conferences. I think they are invaluable.

Thanks, Chuck. Now for the book giveaway! Chuck is offering a free copy of your choice of the 2011 Guide to Literary Agents or Formatting & Submitting Your Manuscript, his first book. To enter, simply leave a comment below. We’ll choose a winner at random! (Update: Contest is closed.)

27 Replies to “Q&A: Chuck Sambuchino, Our Guide to Literary Agents”

When is it time to sign an author-agent contract?