If you're a writer interested in making money online, don’t miss these insights from author and entrepreneur Sean Platt. 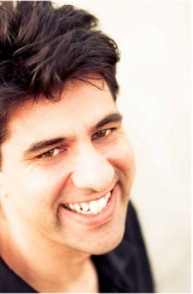 Sean writes everything from children's books to horror novels to landing pages for websites. He co-founded CIMedia, an independent publisher with a focus on writing and social media, and is a contributing writer for Copyblogger. But it’s his latest project that motivated me to find out more about him: a fiction serial called Yesterday's Gone.

What the heck is a fictional serial? Sean explains below. If you want to learn more or benefit from his knowledge about how to make money writing online, check out Sean’s blog Ghostwriter Dad.

Before pursuing a writing career, you owned several successful flower shops in California and co-founded a preschool with your wife. What made you leave those pursuits behind to start writing?

I have my wife to blame for that!

Cindy started telling me I was a writer approximately 10 minutes after we first met, it just took me 10 years to listen.

I first started pen to paper when my daughter started kindergarten. Because of the preschool I had been with her every day, and when she was gone I really felt her absence. Cindy suggested I go into a room, close the door and write, see what would happen.

So I did and I came out with a 600 page manuscript a few months later.

Of course, I stopped for a few meals in between!

The manuscript was terrible. Not the worst thing ever written, but close enough. Still, it taught me that I could sit in my seat and finish what I started.

You've had success with writing a variety of projects, from children's books to marketing content. Do you have any secrets to share about what has helped you make money writing online?

It took me far, far too long to realize this essential truth: You can’t make money by being fancy. Don’t write only to please yourself, and don’t write for other writers, at least not without a specific plan. That’s a mistake a ton of freelance writers make, myself included for half of forever, writing for other writers rather than for the people who will pay them for services.

It’s difficult to make money online by playing the attention game. If you have a specific skill, like writing sales copy, you can charge far more per word or hours spent on task. So it's best to develop and market those specific skills.

The content that pays best is content that explains how to do something, or make someone’s life easier in some way. Thinking you can blog forever to get noticed is a sure path to misery, obscurity, or both.

On your site, you talk about making “passive income” as a writer. Can you explain what you mean by that? How have you made it work for you?

Passive income is any income you’re not actively working for. In other words, you make money without trading time.

It’s really easy to fall into the freelance trap, trading time for money on repeat, eventually finding yourself on a hamster wheel that's spinning too fast to step off. Info-products are a great way to build passive income, as are paid newsletter subscribers or anything else you can build once and have people pay for over and over again.

My favorite type of passive income is books, both nonfiction and fiction, although fiction is my favorite, by far.

Have you noticed any mistakes new online writers tend to make? Any tips on how to avoid them?

The biggest mistake is writing for other writers, followed closely by the scattergun approach to online profitability (doing too many things at once and not being clear on your next best move), trailing just ahead of too much time wasted on social media hotspots without an intelligent engine to drive the time.

I don’t know many online writers who have avoided those three errors, including myself and everyone on my team. It’s hard to avoid, but the best way is to simply make your mistakes, then learn enough to avoid them the next time.

You've just launched a fiction serial, Yesterday's Gone. What the heck is a serial anyway? Can you fill us in on how this format works?

We modeled Yesterday's Gone after serialized TV, rather than books. The concept of serialized fiction has been around since Dickens. It just means taking a single storyline and breaking it into several parts to fuel anticipation between episodes.

You can find a few examples in today’s literature, but they’re few and far between. The most notable contemporary example would be Stephen King’s, the Green mile.

We modeled our work after serialized television like Dexter, LOST, Breaking Bad, the Sopranos, etc. Shows that leave you wanting to gobble the next episode to see how cliffhangers are resolved and story lines are settled.

Each of our Yesterday's Gone episodes leads into the next with a surprising cliffhanger, all the way to the “season finale” in book six. Our books are also short, approximately 100 pages each, which neatly fits the way modern consumers like to buy bite-sized content.

Now that we're on the same page about its format, tell us what Yesterday's Gone is about!

Ha, great question! The serial is a post-apocalyptic thriller, and the way I describe it in a sentence when people ask is, If LOST was written by Stephen King, though that doesn’t really do much to describe it all.

The premise is that these various characters wake up in world gone missing. No one knows why or where everyone has gone. It isn’t as though there’s been a max exodus or execution, people are just missing, except the few who aren’t.

But it isn’t like the Rapture, or Left Behind, or anything like that. It’s spooky, supernatural, and a hell of a read. Pages turn. Fast.

You co-wrote Yesterday's Gone with David Wright. Was this your first time co-writing a book? Did you find it to be a challenge?

Dave and I have written many things together. As a ghostwriter I’m comfortable with collaboration. In a way co-writing is easier for me because I never have to worry about tightening loose ends. Dave isn’t just a great writer, he’s a great editor, too, and keeps me from falling into my worst tendencies.

I believe most writers could benefit with collaboration, but I am ridiculously lucky to have Dave as my writing partner.

Are you pursuing any other projects you want to tell us about?

Oh, man! I’m pursuing all over the place!

Well, I have many books, from children’s work to horror to writing and social media. If you’re a budding writer yourself, I have a terrific FREE eCourse.

You can check out the Yesterday’s Gone trailer. Start by buying the Yesterday's Gone pilot for $.99, or get the full “season” for just $4.99 and keep the smile on your face for a week.

Getting Over That Blogging Hump