Don’t you love when an online friend becomes an in-person friend?

That’s what happened when I finally had coffee with Lisa McKay, face-to-face, during her recent visit to Washington, D.C. Lisa lives in Laos, but we’ve been following each others’ blogs and corresponding via email about our memoirs for years. When Lisa told me she decided to self-publish, I knew I had to get her here for a Q&A. I wanted to know everything about what worked for her and what didn’t — and these brain pickings should be helpful for a lot of you, too. 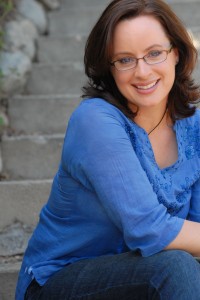 TTW: Tell us about your just-released book, Love At The Speed Of Email. Your first book was a novel, so why did you choose to write a memoir this time around?

Lisa: Love At The Speed Of Email is the story of an old-fashioned courtship made possible by modern technology. A quick excerpt:

Lisa looks as if she has it made. She has turned her nomadic childhood and forensic psychology training into a successful career as a stress management trainer for humanitarian aid workers. She lives in Los Angeles, travels the world, and her first novel has just been published to some acclaim. But as she turns 31, Lisa realizes that she is still single, constantly on airplanes, and increasingly wondering where home is and what it really means to commit to a person, place, or career. When an intriguing stranger living on the other side of the world emails her out of the blue, she must decide whether she will risk trying to answer those questions. Her decision will change her life.

I didn't intend for this second book to be a memoir. In fact, I was working on a novel on human trafficking when my husband, Mike, and I became engaged. But as we began to plan our wedding I found it increasingly difficult to flip in and out of such vastly different worlds – the happiness of the one I was living in and the harshness of the one I was trying to write about.

After months of trying to force myself to persevere with the novel, one day I stopped long enough to ask myself what I really wanted to be writing about. The answer to that question wasn't trafficking. It was exploring the idea of home.

I'd spent my childhood living in countries as diverse as Bangladesh and Zimbabwe. I carried Australian and Canadian passports. I was living in Los Angeles working for a non-profit organization that provided psychological support to humanitarian workers worldwide. I was hopelessly confused as to where home was. Perhaps, I thought, I could write my way towards clarity. That's when I started working on the memoir.

You've told me that Love At The Speed Of Email took you more than three years to write. How was the process of writing memoir different than writing fiction? 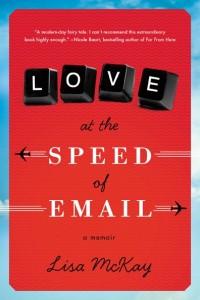 When I was writing my first novel (My Hands Came Away Red), I found myself getting surprised by what was happening. As I figured out the “what” of plot, however, an understanding my character's actions and reactions followed fairly naturally.

Writing a memoir reversed this process. I already knew what happened – I'd lived it – but I had to work much harder to figure out what it all meant to me, then and now. (Lexi here: LOVE this point. So true!)

The plotting process was different, too. With the novel I wrote my way into the story blind, without an outline. As I was wrote, the story gained momentum as events unfolded.

In contrast, I had a clear vision for the start and end of the memoir, but little idea of how I was going to get from one place to the other. Despite repeated outlines I continued to flounder in the middle until the very final drafts of the manuscript.

Why'd you choose self-publishing this time around when you've already published a book traditionally?

I have an agent who is very enthusiastic about this book, and initially we did pursue traditional publication. It received a lot of praise from editors, but in the end it just wasn't right for any of the publishing houses we approached.

A couple of the editors who saw it wanted me to rewrite it to focus more on their target audience. Two publishing houses even offered me a contract to fictionalize it. I seriously considered rewriting it as a novel, but ultimately I decided that fiction wasn't the vehicle I wanted to use to tell this story, memoir was.

My agent suggested that we either wait a year and approach publishers again when the market shifted a bit, or self-publish.

I decided to self-publish partly as an exploration of this new frontier of publishing that's only recently opened up, and partly because I wanted to see this book all dressed up and out on the town so that I could move on and turn my attention to other projects.

What have you learned about self-publishing that surprised you?

I could write a whole series of posts on this topic. Maybe I will. In the meantime, here are just a few things. Assuming that you want to self-publish well (good cover, professional editing and formatting, and decent marketing)…

When it comes to promoting your book, where are you focusing your efforts? Do you have a goal for how many copies you'd like to sell?

Given that we live in Laos, I'm focusing most of my promotion efforts online. I'll be doing interviews and guest posting on blogs throughout the summer in a virtual book tour.

As for how many copies I'd like to sell… I hope to sell enough copies to break even on this project. I'd like to earn a living from writing someday and this particular publishing adventure is all part of the process.

Beyond that, the sky (or, more accurately, the internet) is the limit. I will be thrilled if it breaks out and sells big, but mostly I just want to see this tale find its way to people who will enjoy a good love story or who are grappling with questions about home, commitment, or purpose in their lives.

I love the look of your website! Did you build it yourself? If so, how'd you learn how to do that?

Thank you! I used to blog on WordPress.com and host my website at another location, but when I decided to self-publish I knew it was time to update and consolidate my site.

I did build the new site myself. I used the Chameleon Theme by Elegant Themes and moved it over to WordPress.org. I did it all by trial and error (which can get time-consuming and frustrating, but is also a great way to teach yourself new skills). I hired a friend in Laos to help me with a couple of final tweaks that I couldn't figure out how to do myself.

One of the big themes of this blog is entrepreneurship, and I know you work as a consultant in Laos. What type of consulting do you do, and how do you find that work?

I originally trained in forensic psychology, and now my specialty is stress, trauma and resilience. Since we've moved to Laos I've written a masters-level distance-learning course for the University of East London, published a thought paper on resilience, taught in Bangkok for the DART Center for trauma and journalism, and edited training materials to be used in Sudan and Chad.

So far I've been extraordinarily fortunate in that consulting work has found me, rather than the other way around. All of these projects came through contacts I made in my previous full-time positions, so I guess I did my part in finding the work by:

What advice do you have for others who are interested in writing a memoir?

Screeds have been written on this topic, but here are a couple of points I tried to keep in mind:

Tell a story: When I started writing this memoir I thought I might be able to “glue together” a whole bunch of essays and blog posts I'd previously written and call it a book. A friend and editor bluntly told me that I was neither famous nor good enough to get away with that yet and that I had to tell a coherent story if I wanted to write a memoir. He was right. If you want to write a memoir and you don't know anything about story arc, google it (for starters).

Write into the unknown: I don't know who it was that said that if the author hadn't discovered anything during the course of the book the reader likely wouldn't either, but it's stuck with me. If you want to write a memoir, be prepared to do some soul-searching and struggling to put into words some of your shadows and your fears. Work to learn about yourself while you're writing.

Take your time: I know some people can write a book in a couple of months. I'm not one of them. My work is always stronger when I'm prepared to edit, edit, edit, and let it sit and breathe between drafts.

Thank you so much, Lisa! Great advice here.

Thanks for hosting me on this virtual book tour! (Isn't the internet amazing?? I remain astounded that I can launch a book from Laos.)

Speaking of which, I'm looking for ways to get the word out about this book this summer, so if anyone reading would like me to visit their blog just let me know. Please do pick up a copy of Love At The Speed Of Email on Amazon or Barnes and Noble or drop by my blog and say hello. I'd love to hear from you.

Readers: Have any additional questions for Lisa?