A few nights ago I watched a new documentary, I’m Fine, Thanks, a film about complacency and expectations and living the American Dream — even if it’s not your dream. 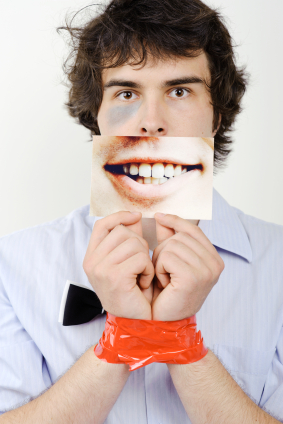 Is that red tape really necessary?

(I got an early download because I backed the project on Kickstarter, but the film will soon be available for purchase. In the meantime, you can check out the trailer.)

For a lot of people, I imagine the film will prompt a huge ah-ha moment: Holy cow, I don’t have to follow the same career and life path as everyone else!

That epiphany is positive, happy, empowering.

But I found the movie to be kind of, well, sad.

Why? Because the film is full of people who are unhappy with their lives — and until they had their epiphany (which is why they were featured in the film), they thought it was normal to be unhappy with their jobs, their responsibilities, their choices. Which means plenty of other people are out there feeling the exact same way, people who haven’t yet figured out that finding happiness often means doing something that’s perceived as unconventional.

It made me wonder: why do so many of us simply accept feeling unsatisfied and unfulfilled at work? When did it become OK to let all of our first-world luckiness turn into regret? Why do so many people think it’s normal to be unhappy?

Most of our obligations are actually choices. And wanting to love your job isn’t asking too much.

You deserve it to be happy — in fact, you owe it to yourself. Don’t let anyone tell you otherwise.

8 Replies to “When Feeling Unhappy and Unfulfilled Becomes Normal”

My One-Year Anniversary of Work Freedom (Plus a Sale to Celebrate!)