A New Way to See the Person Next to You

After the World Domination Summit, one of the things I heard myself and other attendees saying again and again was how great it was to be surrounded by people who want to live remarkable lives.

People who want to live differently. Who have great stories to tell. Who see the world through a lens that’s tinted with opportunity. 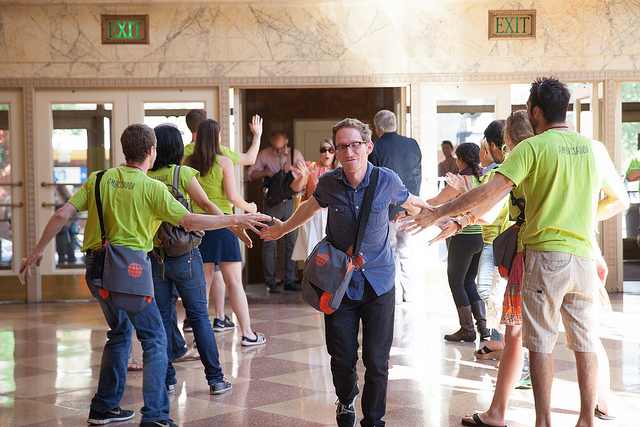 If only we got high fives every time we walked into a conference… Photo credit: Chris Guillebeau and his crew

But when I really got to thinking about it, I realized it was probably our approach, how we saw the people around us, that created that perception, rather than the actual makeup of the attendees.

Here’s what I mean. Whenever I sat down in that big theater to hear our next speaker, I turned to the person in the chair next to me, introduced myself, and asked what they were up to in life. Those were some of my favorite moments from the weekend, so much so that I usually tried to enter the theater alone, rather than with a friend, so I would be more likely to meet someone new.

Why did I feel comfortable introducing myself? Because I knew the person next to me probably had an alternative career or loved backpacking around the world or chose to live mindfully. I knew we probably had something big in common. And I knew they probably wanted to be inspired by my story, too.

In the Real World, I’m far less likely to introduce myself to the person sitting next to me. Partly because it requires guts, and partly because I figure the person next to me probably doesn’t share my outlook on life.

But what if we pushed ourselves outside our comfort zone to say hello? Sure, we’d meet some duds, and some people would judge us for being too friendly. But I’m willing to bet we might also be surprised to meet others who are doing cool things and living remarkable lives.

What I’m saying is, the person next to you might be WDS-caliber, and you don’t even know it. You wouldn’t know it, of course, from looking at them. It takes a little bit of conversation — and perhaps a little bit of feeling uncomfortable — to figure that out.

So next time you sit next to someone on a flight or at a coffee shop or wherever you hang out, try looking at them with new eyes. You might not want to start the conversation with, “So, what’s your passion project?” but give them the benefit of the doubt that we gave every WDS attendee.

Work Should Go Around Your Life -- Not the Other Way Around

Why (and How) You Should Invest In Yourself, Not Just Your Employer