Why Our Conversations Around Startup Funding Are All Wrong

Every time you pick up a business magazine, look at the agenda for a lean startup meetup, or listen to an interview with an entrepreneur, you hear people talking about how to land funding for your startup, hailing companies that have managed to secure investment as the holy grail of success.

But bootstrapping? Building a company that pays for itself from the beginning? Figuring out how to keep costs low when you’re starting out? It’s barely part of the conversation, even though most budding companies would be better off taking that approach.

Why have we glamorized borrowing and spending rather than bootstrapping and going truly lean? A column by Thomas Goetz in May’s Inc. Magazine (can’t find the link) goes so far as to suggest it’s smart to max out your credit cards and go into debt for your startup. Other founders, too, tell tales of how they used all their savings and ended up living on a friend’s couch… before finally striking it big. (We almost never hear about the entrepreneurs who fail to strike gold after depleting their savings and spending every investment dollar.)

Why are we telling aspiring entrepreneurs that this is a good idea? Especially when many companies are just that at the beginning… an idea. In early stages and beyond, it’s far smarter to do everything in your power NOT to seek funding. And while you’ll likely need to put some money into your big idea, certainly don’t spend your entire safety net. Instead, invest grit and time and energy, and work your butt off to create a freedom fund, even if it means earning for a while through another job.

For some startups, funding might be necessary, like when you’re building a physical product or the success of your idea relies on scaling quickly. Some young companies look to investors for leadership and experience, too. But for most of us, the conversation should be around how to build an awesome company without taking funding, not how quickly you can convince investors to give you cash. (Click to tweet this.) 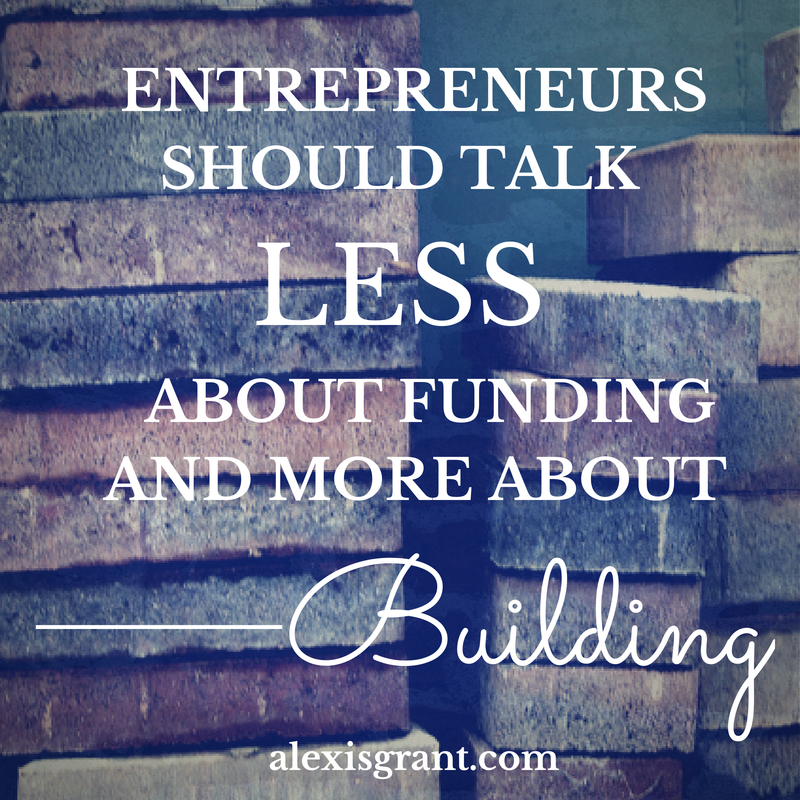 The big thing you lose when you get funding from investors

Why do I advocate bootstrapping over seeking funding?

Because for all the things you gain when investors decide to back your company, here’s the big thing you lose: autonomy. That idea that’s been your baby from the beginning now belongs to someone else, too. And while they might not quite be willing to stay up all night feeding it, they’ll probably want to make sure you’re staying up all night working on it. They have a stake in your success. This not only means a loss of control; it also results in a wee bit (read: crushing pile) of pressure.

Bootstrappers only have to answer to themselves and their clients/customers/users, which means more freedom to create what really matters to you. Unfortunately, you’ll have to deal with some players in the entrepreneurship community who think you’re not the real deal because you’re not spending other people’s money. This school of thought is inaccurate: my company works with a number of startups, some funded and others bootstrapped, and the funded startups are no more of the real deal than the bootstrapped ones.

To be fair, entrepreneurs who fall into one camp or another often have different goals. Founders of startups seeking funding are usually looking to build a business that turns into an empire, one that acquires other businesses or perhaps is acquired itself. Bootstrappers, however, are sometimes, though not always, lifestyle entrepreneurs.

I founded my content marketing business, for example, not because I wanted to create a company I could eventually sell (although I see now how that could be a possibility eventually), but because I wanted a business that would support my life. That doesn’t mean my team and I don’t work hard — but we believe you can work hard and do amazing work while prioritizing family, health and/or travel.

Which route is right for you?

These two groups — seeking funding verses bootstrapped — typically behave differently, with one plowing ahead, hiring and pushing itself to become a growth company (which has advantages and disadvantages), the other growing more conservatively depending on how quickly revenue is coming in (also for better or for worse). I’ve taken the second route, adding to my team — now 10 part-timers — as revenue increased.

Businesses like ours tend to hum quietly in the background, often earning hundreds of thousands of dollars of revenue a year or more (and creating jobs!) while startup entrepreneurs take the stage. But I wonder, which type of business has a higher rate of success? A bit of research led me to this article in The Wall Street Journal, which reads:

Apparently, you’re more likely to succeed if you do get funding. But look who does better long term: those of us who bootstrap.

So stay lean, and chase investors only as a last resort. It’s a far cry from the get-funding-now mentality that’s so pervasive in today’s startup culture, but it might just make you more successful and happier in the long run.

7 Tips for Transitioning from Day Job to Freelancer or Entrepreneur

When Life Beats Out Business: A Reflection on #WDS2014