We moved to Florida two months ago for the sunshine, a big backyard and my job as executive editor of The Penny Hoarder.

I’d just returned to work after maternity leave, and it felt good to be based at our headquarters in St. Petersburg. Our 3-month-old was adjusting to being away from me all day. Our toddler was about to start preschool.

At first, it was just a possibility. The hurricane might hit Florida. I was busy at work — we’re a fast-growing media startup — but I made time to look at flights out of Tampa. It was only Tuesday, but already, not many flights were available. They were expensive, and it felt like a big disruption to travel with the kids for a storm whose path was uncertain.

But the next day at our staff meeting, I could tell some of my colleagues were getting antsy. Our CEO, Kyle Taylor, tried to calm our nerves, encouraging employees to prioritize family and safety, reassuring everyone we wouldn’t be docked vacation days if we took time away to prepare. For anyone who wanted to evacuate, he said, the company would use its American Express points — hey, we’re penny hoarders! — to book and pay for hotels anywhere in the country. Our company mission is to make finance less stressful for our readers, and this was one way we could do that for our employees, too.

I left that meeting wondering if my family should leave. But where would we flee? It was too early to predict where, exactly, Irma would hit. Nowhere in Florida seemed a safe bet. Already we were hearing reports of bumper-to-bumper traffic and gas stations out of fuel. We worried about getting stuck on the side of the road with two little ones.

We don’t live in a flood zone, and our home has hefty storm windows and a sturdy roof. So when Thursday’s models showed the hurricane was most likely to hit Florida’s east coast, we decided staying home on the west coast was safer than hitting the road.

Meanwhile, our company Slack channel, which we use instead of email for internal communication, became a pseudo command center. Staffers shared tips on where to find fresh water and gas, and which sandbag locations had the shortest lines. Those who evacuated sent updates from the road, letting others know about traffic volume on major highways and how long it took for them to drive to their destination.

Our HR manager, Erin O’Neill, had the foresight to run payroll ahead of schedule, before Irma hit, so employees would still get paid on time even if our accounting team couldn’t get online after the storm. IT Director Stephen McDermott identified who would be on call for unexpected tech issues, shifting critical tasks to employees who had evacuated to other states and had reliable power.

When the city ordered mandatory evacuations for flood zones, employees who lived in non-evacuation areas opened their doors to their colleagues. Because of our fast pace of growth, many of our employees were new to the company, so seeing that kind of camaraderie was a bright spot during a dim few days.

As we inched closer to Sunday, the day Irma would roll over Florida, our family — and the city — got more stressed. Every time I looked at a map of the hurricane’s projected path, the news was worse. Years before, I’d traveled through West Africa by myself and interviewed inmates on death row without worry or hesitation. But waiting on that hurricane with two kids under 2, I was filled with dread.

By Sunday morning, projections showed St. Petersburg was likely to get a direct hit from a Category 3 or 4 storm, causing strong wind and a catastrophic storm surge. We moved a crib mattress into our storage space under the stairs, planning for the kids to sleep there that night. We checked in with family, letting them know we’d done everything possible to prepare.

Then we were spared. While other parts of Florida got pummeled by Irma, she weakened and turned east, sparing the Tampa Bay Area the worst of her wrath. We still spent the night in the storage closet, listening to the wind of a Category 2 storm. But the damage to our city, neighborhood and home was far less than expected, and infinitely less than what others experienced across our state and in the Caribbean. When the sun came up on Monday, our entire city breathed a sigh of relief. 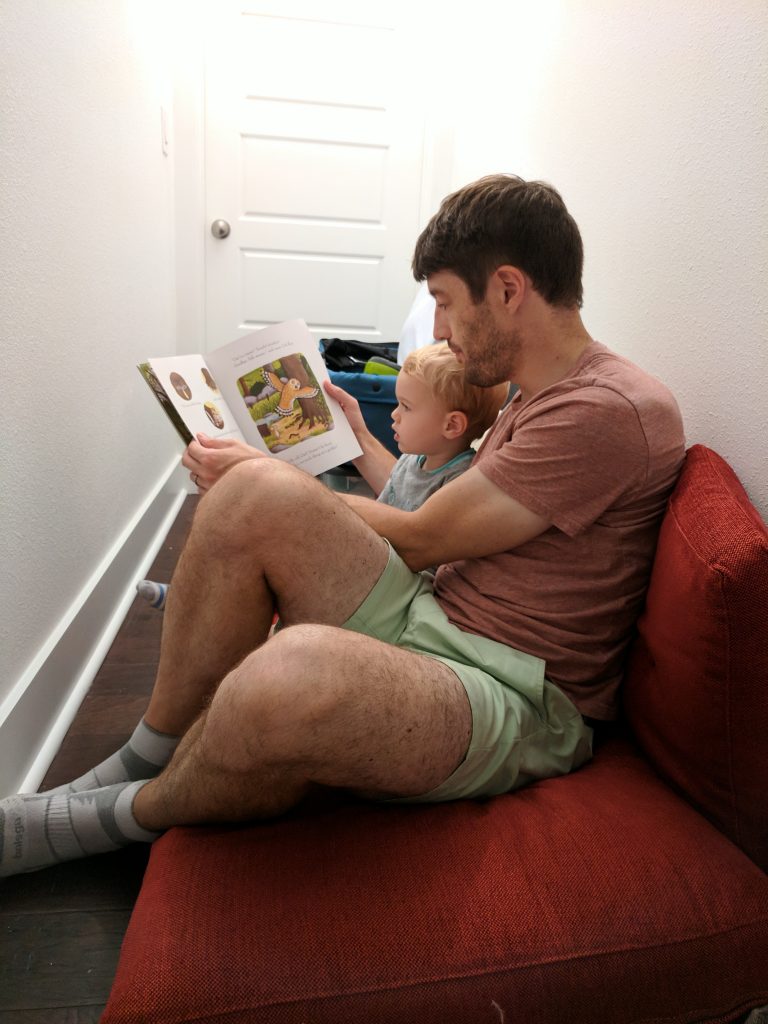 My husband reads to our toddler in the closet during Irma.

In Irma’s wake, minor inconveniences slow The Penny Hoarder’s return to normalcy: lack of electricity and internet, downed trees and minor structural damage, schools that are closed until next week. But all of our employees have been accounted for, and everyone’s families are OK. Our office is an air-conditioned refuge for those without electricity. Employees who can work are picking up slack for others, and we are all getting back to our duties, little by little.

We learned by doing, as young companies often do, and now we have a checklist — an emergency plan — for next time. While some productivity and revenue loss is inevitable during a crisis, here’s what we’re most proud of: We managed to continue to serve our readers without interruption. As we took turns waiting in gas lines and moving our belongings to higher ground, readers visited our site for helpful and fun money advice. Even big, scary Irma couldn’t get in the way of that.