Authors: How to write a press release for your book

Want more helpful tips on writing? Sign up for my free newsletter!

Journalists delete dozens of press releases each day. Dozens! I only write about a small fraction of the releases that pop up in my inbox.

So how do you get a journalist to write about your book? Keep in mind that my experience is in newspaper and online journalism, and things might work slightly differently for other types of media. But follow these rules, and you’re bound to get more media attention for your book.

Here’s how to create a press release that will catch the eye of a journalist:

Make it newsy. I don’t give a hoot that you just published your first book. Unless you’re Snooki and I’m a tabloid, it’s highly unlikely that I’m going to write a story about you and your book. 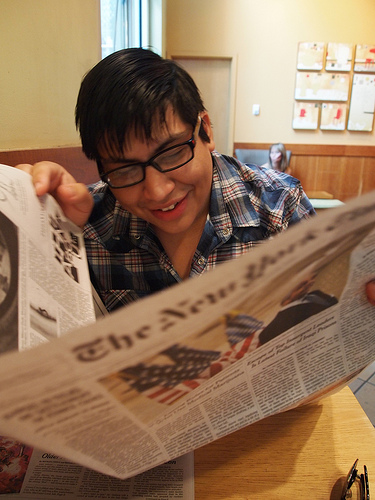 Pitch yourself well, and hey, it could happen.

What I care about is breaking news. So it’s up to you to find a way to make your book release sound newsy. The best way to do this is to present yourself as a source on a newsy topic or identify a trend that you’re qualified to speak about. Give the journalist reason to interview you, and hopefully when he quotes you, he’ll mention your book.

For example, no publication (well, other than The New York Times book review and Oprah Magazine, of course) is going to write about my book, Please Send Pants. What they might write about or discuss on television or radio is the trend of taking a career break to travel or women traveling alone. And guess who would be the perfect source for those stories? Me! That’s how I’d pitch myself in a release.

(Yes, this is easier with a nonfiction book, but I think you can accomplish it for most fiction, too.)

Target, target, target. Don’t spam every journalist and her mother with your press release, hoping it will stick. Find publications that write about what your newsy topic, figure out which journalist writes those stories, and pitch that specific journalist.

Yes, this takes time and effort and detective work, both to figure out who that person is and to find their e-mail address. It often takes more work than writing the actual release. But it significantly increases your chances of getting covered. Guess what’s likely to happen to your press release if you send it to the general news desk at your dream publication? (Unless you’re Snooki.) Nobody will notice it. If you send it to the journalist who covers that beat, even if he’s not ready to write about your topic at that very moment, he might think of you as a source down the road.

Cater to each journalist you pitch. Like with a cover letter, your pitch will be far more effective if you cater it to the needs of whoever you send it to. You can quickly blast an entire list of journalists with your press release, but you’ll be more likely to get coverage if you make that release relevant for each individual journalist. I’m not talking about rewriting the release a dozen times, just tweaking it.

Here’s a good example: A week or so ago, a school released a study about how standing tall makes us act more in charge. If the public-relations professional had pitched it to me like that in an e-mail, I probably would’ve tossed it out like all the other press releases that clogged my inbox that day. Instead, she told me why job seekers — my target audience — would care: because they’re more likely to succeed in an interview if they stand or sit up straight. I liked that practical angle, and ended up writing about it.

Write the journalist a personal note. After you paste the press release into the e-mail, write a personal note at the top. Introduce yourself and tell me — in three sentences, not three paragraphs — why you’re sending me the release and why I should care.

This is when it pays to do the legwork yourself, rather than hire a publicist. Because if the note is from the actual source, so long as that person is cogent and brief, I pay more attention than if someone else writes to me on behalf of that person. Because in general, I don’t like working with publicists. It makes extra work for me, because I have to go through them to get to the person I want to talk to. It forces me to take a risk on the actual source; I have no idea whether they know how to string together a sentence, I only know the publicist can string together a sentence. Also, public-relations folks tend to want a conference call, rather than simply helping me set up an interview with the source, which is annoying for a bunch of reasons I won’t go into here. (Because I’ve ranted enough.) What I’m saying is, if you know how to promote your book yourself, the pitch is better off coming from you.

In that short personal note, address me by name, and I’ll probably read it all the way through. Which means I’m more likely to consider your pitch than if I just skimmed the release. Because when a releases lacks a personal note, I’d guess I spend less than 10 seconds looking it over to decide whether I’m interested. Yup, you put all that work into the press release, and I delete it in 10 seconds. And that’s exactly why it’s crucial to…

Get to the point. Fast. If not in the title, then in the first sentence. Tell me right away what you have to offer. And keep your press release short, no longer than a few paragraphs. Because if I’m only spending 10 seconds judging what you have to offer, you only want your best content in that pitch.

What do you mean, you can’t cut your pitch down to a few paragraphs? You’re a writer. Try harder.

Display your contact information prominently. Give me an e-mail (that’s how I usually make my first contact), phone number and website. If you’re pitching an event, I love releases that lay out all the information at the top, like an invitation:

What: Your one-line pitch
When: Date and time
Where: Your venue

Offer an e-version. No, this does not mean a PDF, as one poor PR professional thought when I asked him for one earlier this month. I’m talking about an electronic version of the release, you know, on that new-age thing called a website. Why? Because even if I’m not interested in writing a story about your pitch, I might want to share it with my networks on Facebook and Twitter, which usually works in your favor. And I’ll only do that if you make it easy for me.

Know the power of local. If you’re from San Diego, you’re far more likely to get coverage from San Diego media than from television or radio or print media in upstate New York. That’s because readers like to read about people who are like them, and reporters are tasked with finding those people.

The local angle is so powerful that it might even trump the newsy angle, meaning your local media might want to write about you and your book just because you have some connection to that area. Don’t forget to mention your local ties in your press release when you’re targeting local media. Same for pitching alumni publications.

Have you had luck reaching out to media? What worked for you? What aspects of book promotion do you find most difficult?

32 Replies to “Authors: How to write a press release for your book”

When the finish line is in sight, sometimes we panic