The myth of getting paid to travel

Want to know how you can REALLY travel the world? Check out my eguide, How to Take a Career Break to Travel.

I can’t stand all the posts on travel blogs that claim it’s possible to travel the world for free through writing. It’s NOT. Okay, maybe it’s possible for a few select writers. But for the majority of us, forget about it.

Unfortunately, those posts get tons of hits because they prey on the hopes and (unrealistic) dreams of hordes of wannabe travel writers. I’m here to burst that bubble.

Here’s why there’s no way in hell you’re going to finance your trip by writing along the way — and what you should focus on instead:

Most publications pay shit for travel writing. I love the Matador Network, a traveler’s community that publishes pieces by up-and-coming writers. But you know how much they pay? $25 per piece. (June 2015 update: They now pay $40 for original pieces.) Now, that can go far in a developing country — it’s about how much I spent each day while traveling in Africa — but it’s not enough to make a dent in your travel expenses. Most online-only publications that want travel pieces pay similar rates, if at all.

To get published in a publication that pays better, you need experience. I realize this is a Catch-22 for newbie writers, that you need a clip to get a clip. That’s why you break in by writing for small, low-paying websites or publications. But to make enough money to fund your around-the-world trip, you’ve got to break into larger markets. Even then, unless you’re working all day every day — when you should be enjoying your trip — you won’t bring in enough to cover airfare, housing and other costs.

I know this because I’ve done it. While traveling in Africa in 2008, I freelanced for a handful of publications. I could do this fairly easily because I’d been working as a journalist for several years, so I had both experience and connections. But even then, the money I brought in from writing only paid for a portion of my trip. How’d I make that money? Read on… 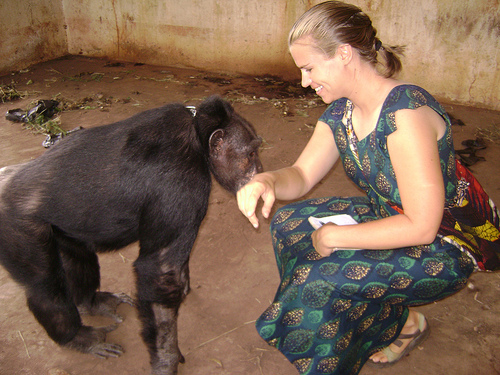 Reporting in Burkina Faso (with my handy, old-school notebook)

You’ll earn more if you write about something other than travel. Not many markets pay well for travel writing. So if you really want to make money from writing, write about other topics.

For example, while in Senegal, I wrote a profile for my college alumni publication about an alumnus who was volunteering there in the Peace Corps. (Check out this piece about getting your writer’s foot in the door at an alumni publication.) In Burkina Faso, I spent a week at an AIDS clinic run by a Houston-based organization and wrote a newspaper piece about it.

Notice a trend here? Most publications won’t pay for a story about something that’s happening in another part of the world unless it has a local angle. They want to be able to tie it back to their readership. By broadening what you’ll write about to include topics other than travel, you’re likely to land more assignments and make more money per assignment.

If you’re always working, you’re not getting the most out of traveling. Don’t get me wrong, I enjoy both writing and reporting while traveling. Part of the reason I like working as a journalist is because it gives me access to places and people I otherwise wouldn’t have. Reporting stories while traveling gave me purpose, helping to shape my trip. But sometimes I wish I worked less than I did. In too many instances, I’d find myself frustrated in an Internet cafe, trying to upload a photo to an editor, when I should’ve been out exploring a new city.

The best places to travel don’t have an Internet connection. Which means that if you’re trying to get work done while traveling, you might not go to the best places. Don’t do it. Go where you want to go, and make your money-making venture your second priority. Otherwise you’ll regret it later. (2015 update: Internet access is becoming more ubiquitous, so this might not be such a problem for you anymore. You also might consider bringing with you a WiFi dongle like Karma; it works only in the U.S., but with a little research, you can find international options, too.)

You need a huge audience to make money from blogging. Sure, several well-known travel blogs have a big enough audience that it makes sense to monetize them. But yours probably doesn’t. Maybe it will, someday. But don’t squander all of your travel time away in Internet cafes trying to make that happen. If this is your plan, at least have your blog ready to go before you travel. That way, you 1. will realize it’s more difficult to make money from a blog than you thought and 2. won’t spend your entire time traveling working on your blog.

Press trips aren’t for the press. Journalists with ethics don’t accept free trips with companies and then write about them. (Feel free to argue me on this point; I stand by it.) For bloggers, this has become a common practice — so common that I’ve even advised one of my clients to offer a so-called “press trip” to get publicity. And that’s fine, because bloggers often have different goals and abide by different rules than journalists. (If only the public knew the difference.) But when you use this method to travel for free, know you’re firmly placing yourself in one camp, not the other.

Even low-budget trips cost money. I’m all about traveling on a budget. (In fact, I have a post coming up that explains how much it cost for my six-month backpacking trip in Africa.) And I think it’s a great idea to work as a volunteer to keep down costs. But even those trips cost money. Especially when flying to interesting, far-flung places, I find airfare is my biggest expense. And know what? Few publications or volunteer programs will cover that for you. Even if you’re planning to work while in-country, you still have to get there.

This isn’t intended to be a downer of a post. It’s intended to help you think realistically about how much a career break might cost you and how you might finance it.

My advice? Save money. Doing that is probably more possible than you think. And rather than expecting to get paid to travel or travel for free, approach writing — or better yet, another more lucrative skill — as a way of helping to offset the costs of your trip.

Update: After getting lots of comments on this post, I wrote a follow-up, which you can read here.

70 Replies to “The myth of getting paid to travel”

How to finish your book (or accomplish any dream)