What I learned during 2 years away from the work force

I’ve been working full time now for five months. And though I’m loving my new lifestyle and job, I don’t want to forget all that I learned during my two years away from the mainstream work force.

I say “mainstream” because I was working for much of those two years. After traveling for six months, I worked for a year and a half on my own, writing my book and freelancing and managing social media for small businesses. But for the first time since grad school, I wasn’t working a traditional job, nor was I an employee for any company.

During that career break, I learned a whole lot. I share this with you because I want other aspiring career-breakers to know that stepping away from your job to travel or create some other opportunity doesn’t have to be a career-killer. If you approach it strategically, a career break can actually boost your career — and help you grow personally, too. 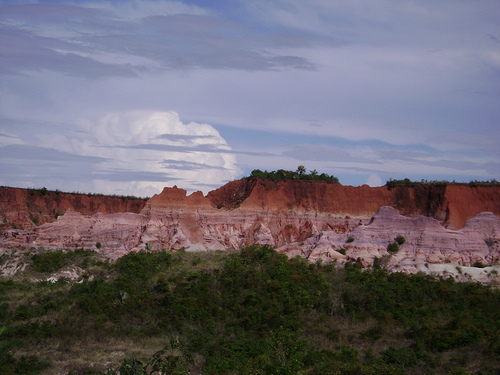 The beauty of a career break: near Mahajanga, Madagascar.

Here’s what I learned during my two years away:

There really are roses to smell. I used to think I was one of those people who thrived on moving full-steam-ahead at all times. But after moving at a slower pace for a while, I realized I enjoy that, too. I liked having time to think and reflect, without worrying about a deadline. And I found my mind worked differently when life moved more slowly; I was more pensive, taking the time to see and reflect on ideas I used to run past.

It’s nice to be disconnected sometimes. As a reporter, my life often revolves around the news. That’s part of what I love about this job; that knowing what’s going on is one of my responsibilities. But when you live that lifestyle, it’s easy to believe that’s all there is. When I stepped away from the 24-hour news cycle, I realized – gasp – most people don't follow the news.

At first I felt like I was missing something. But little by little, as I set myself free from knowing who sat on the Senate Judiciary Committee or which red-light camera would be installed next, room opened in my brain for other things. Instead of trolling news sites in the morning, I browsed blogs on publishing and picked up hobbies I’d forgotten about, remembering my love of cutting and pasting. I took slow walks through the woods and read books, a priority that had fallen on my to-do list during my busy, career-focused life.

Some of us, especially journalists, consider one’s knowledge about current events as a measure of intelligence. But for me, ignoring the news turned out to be freeing, giving me the space to become smart in other ways.

During these two years, I picked up skills I never would have learned in my last journalism job — which is saying a lot, because that was a challenging job. And I’m not just talking about the skills one learns while traveling: how to speak another language, how to navigate foreign countries, how to think with an open mind about different cultures. I also learned hard skills, like how to use a blogging platform and how to build a community around a blog. I became good at using social media to build buzz around a brand — good enough that I started my own social media consulting business. These skills helped me land the job I’m working now.

Free time breeds creativity. It’s amazing how much you can learn when you have the time and flexibility to pursue your own interests. The Internet offers so much information, but we’re often too busy with our jobs to look around. Rather than ignore everything except whatever story I was working on, I allowed myself to troll blogs and click links and take online tutorials. Some people say the Internet is distracting, but I learned a whole lot by allowing myself to be distracted.

Because I was on no one’s schedule but my own, when I needed to understand CSS to tweak my blog, I took the time to learn it. When I wanted to know how to build a Facebook landing page, I figured it out. When I was looking to improve the story arc in my manuscript, I spent an afternoon reading a book that taught me how to do just that. We can certainly learn all of these things while we’re working full time, but it’s rare that we take the time to do it. As full-time workers, we simply have other priorities.

My learning wasn't just virtual. I also spent five weeks writing at an artists' residency in the north Georgia mountains. And then I went to that colony a second time. What mainstream job gives you five weeks to get in touch with your creative side and produce some of the best writing you’ll ever create? Yeah, not many.

Having more time to pursue other passions, I realized that I enjoy and am good at things besides journalism, and that maybe I could be happy doing something else for a living. Who knew? I'd always thought I was one of those die-hard reporters who wouldn't feel satisfied unless I was covering a story. And while I still want to report for now, in retrospect, I think that die-hard feeling was partly a result of not knowing what else was out there.

Reflection should be a priority. Setting my own schedule allowed me to put aside time to reflect on my priorities. I was free not only to decide how to spend my next 24 hours, but also to ponder how I wanted to spend my life. Of course, giving yourself options can become overwhelming, especially when you're not used to having so many choices. But stepping away from the rat race has a tendency to help us see more clearly what we want, and how we can rearrange our priorities to attain it. Rather than running from gym to work to dinner with friends to bed, I had time to think about what was important to me, and how my next steps in life would reflect those priorities.

Working at home isn’t for everyone. Sticking to a home office has its perks: working in my sweats, staying in bed when I've got a migraine, going for midday runs. But while some people dream of working from home, I know now it’s not ideal for me. I missed interacting with colleagues, spending time and effort creating my projects rather than pitching them, and leaving work at work. I missed having an excuse to get away from my desk and out of the house. I missed having a deadline imposed by someone other than myself. I also missed a regular paycheck and health insurance, and the peace of mind that comes along with knowing I have them.

Stepping away helps us appreciate what we have. Part of the reason I’m so enjoying full-time work and all the life changes that come along with it is because I took time away. I find myself appreciating little details I took for granted during my last-full time job, like interaction with co-workers and getting a paycheck every two weeks. Because I took time out for me, I don't resent my job. I'm no longer sitting at my desk thinking about traveling. Actually, that’s a lie. I still do that occasionally. But I’m more able to enjoy my days, more able to live in the present, because I pursued that dream.

I’m a different person than I was before. I redefined myself, if only in my own mind. I used to shy away from calling myself a writer, thinking it sounded too artsy and creative. I'm good at more than writing; I’m good at interviewing, getting information and communicating it in a cogent way. But now, after letting my creative side loose, I consider myself both a journalist and a writer.

It’s not easy to take a career break. It requires savings, shedding some financial responsibilities and rearranging your priorities. With that comes the daily unease of watching your bank balance dwindle. But if you want to take a break from the mainstream workforce to pursue something else, you can make it happen.

(How'd I do it? I worked my butt off to save money while working for three years in Houston; among Houston’s many underestimated perks is the $490/month rent. After backpacking, I moved in with my parents — at the age of 28, after living on my own for nearly a decade. And I figured out how to use my writing and social media skills to make some cash to hold me over.)

For me, those two years were about self-discovery, about figuring out not what I should do with my life, but what I want to do with it. Sometimes, when we're caught up in the nine to five, that sense of freedom gets lost.

So when you have the chance, consider taking some time away from a job that never sleeps. When you return to it, you’ll have new perspective — guaranteed.