Choosing priorities (or why I’m not going to SXSW)

For anyone into social media, Web journalism and the intersection of the two, SXSW is thee conference. Most people know it as a music or film festival, but I’m referring to the Interactive arm, which draws thousands of geeks from around the country each year.

I bought my ticket months ago, when they first went on sale. That was before I had a day job, when Socialexis was my only form of income. I saw the $450 ticket not only as an investment in my social media business, but also in myself, since meeting other techies always gets gears turning in my head.

But as the date drew closer, I began to calculate exactly how much this professional development would cost me. In addition to the entry fee, I’d have to buy a flight to Austin, figure out transportation and pay for food. My housing would be covered; I’d stay with a friend. But I’d also pay in vacation days, which are in limited supply now that I’m working full time.

Then, in January, I applied for two writer’s colonies — Yaddo and VCCA; y’all know how much I love residencies. The minimum stay for both is two weeks, a good chunk of my annual vacation. And though I haven’t even heard back yet about whether I got in, if I went to a writer’s colony and SXSW this year, I’d have all of one vacation day left to spend with my family over the holidays.

That’s when I realized I needed to decide on my priorities. It’s about the money, yes. But more than that, it’s about my time. With a full-time job, I don’t have unlimited hours for projects on the side. 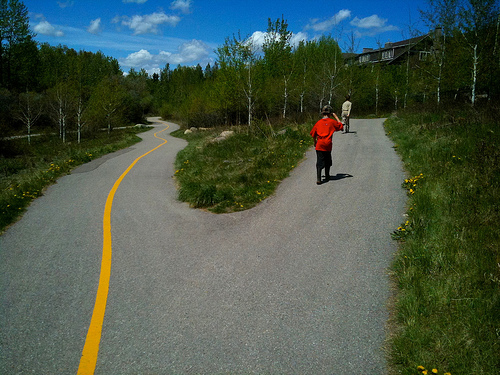 We each face our own fork in the road.

I love helping businesses with social media, and I appreciate the extra income it brings. But I also love writing books. My travel memoir will require my attention until and even after it’s published, and now that I’ve started writing my second book, I want to spend time on that, too.

I had to choose one or the other, I realized. That doesn’t mean I’d drop one of those projects altogether, simply that one would take priority and the other would turn into, well, a hobby.

Which is why I’m not going to SXSW this year. Fortunately, it wasn’t difficult to sell my ticket. But as the mid-March conference approaches, and SXSW hashtags take over my Twitter feed, I feel a little like I’m the only one not going.

But we can’t do everything. That’s difficult for me — and I’m guessing it is for many of you, too — because I love getting involved and putting all the ideas that sprout in my head to good use. But if I really want to write books, then something has to go.

So I chose books.

Have you put aside any projects to focus on your priorities?

How social media helps us make our own luck