Another benefit of online promotion

An author friend and I were recently discussing the merits of promoting one’s book via traditional media verses online.

As a journalist, she has lots of connections in the industry and often does television and radio interviews about her area of expertise, which helps promote her book. But she’s also savvy online, using Twitter, blogging and guest posts to spread the word about her work. 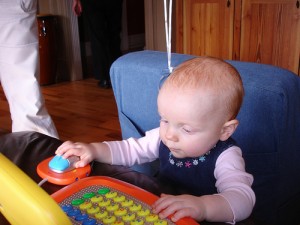 So easy a baby could do it.

It’s virtually impossible to tell which of her efforts have been more effective for selling books. But she brought up an interesting point during our discussion, one I think is worth mentioning here. While interviews with traditional media outlets are often a coveted form of promotion, how many people who see this author on television or hear her on the radio while driving to work actually remember the name of her book? How many get to work, turn on their computer and visit Amazon.com to buy it? Or hop in their car after seeing this author on a niche television program to pick up her book at Barnes & Noble?

How many times have you heard about a book and thought, Oh, that sounds interesting, I’d love to read that — and then forgot to purchase it?

When you promote online, you can offer a link to your book right then and there. Whether you’re writing a guest post, a tweet or your own blog post, a reader who’s interested in the book can buy it without deviating from her routine, without putting in any extra effort. All that reader has to do is hover and click. With that ease, I’ve got to believe the sales conversion rate is higher online — right?

3 Replies to “Another benefit of online promotion”

The best way to get a literary agent's attention on Twitter