My next writer’s colony, and why it never hurts to try

Some good news hit my inbox last week: I’ve been accepted for a residency at the Virginia Center for Creative Arts!

Known as VCCA, the colony calls itself an “international working retreat for visual artists, writers, and composers situated in the rolling foothills of Virginia’s Blue Ridge Mountains.” The program offers fellowships between two weeks and two months long, and it’s located about a three-hour drive from Washington, D.C., my latest home. 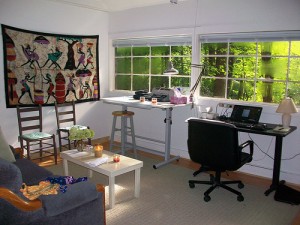 My studio at The Hambidge Center in 2009.

I’ll be there for two weeks in September, working on my next book. Unlike my last two residencies at The Hambidge Center in Georgia, where each artist had her own studio in the woods, VCCA residents all live in the same building. It should be a fabulous opportunity to get to know some other creative souls, escape from my unrelenting email and focus on my next project (which I’m not yet ready to reveal).

If you recall, I applied not only to VCCA this year, but also to Yaddo. Which, to be honest, was a piss-poor strategy, because I knew it was unlikely I’d get into either colony. Yaddo accepts about 22 percent of applicants, and VCCA’s acceptance rate is only slightly higher, 37 percent, according to the Alliance for Artists Communities. (Compare that to the less-prestigious but equally awesome Hambidge, which has a 76 percent acceptance rate, the AAC reports.) So if I was really set on going to a colony this year, I should’ve also applied to a “safety” colony, one with a higher acceptance rate. But I had my eye on those two residencies, and I figured if I didn’t get in, I’d use my vacation time to travel.

Yaddo rejected me. I don’t often blog about rejections, because it can sound like whining and doesn’t really benefit anyone. But I’m telling you about Yaddo because sharing only success paints an inaccurate picture of the writer’s life, particularly one like me who’s jumping from one genre (journalism) to another (memoir). It ain’t all pretty, and there are bumps and rejections along the way.

But facing rejection is normal. The key is to keep your head up, keep chugging and keep trying. And at some point, even that colony you thought would probably reject you will respond with an email saying YES.

While I’m super excited about this opportunity, this means I won’t be taking an overseas trip this year. Now that I’m back working a full-time job, I only have three weeks of vacation. (For my international readers, that’s normal vacation policy in the U.S., at least for journalists. Pathetic compared to our overseas counterparts, right?) But I’ve written before about choosing priorities, and this year I had to choose between traveling overseas and going to a writer’s colony. Which means this traveling writer will be taking you not to a rural village in Africa or mountain hut in New Zealand or beach town in Asia, but to the “rolling foothills of Virginia’s Blue Ridge Mountains.”

Bring on those foothills.

Want to apply for a writer’s colony? Check out my primer on how to find and apply to residencies or posts from my previous residencies.

5 Replies to “My next writer’s colony, and why it never hurts to try”

Your opinion counts: Kindle or Nook?