On my lunch break today, I headed over to the Newseum — a fabulous museum about news — to see Today’s Front Pages. It’s an outdoor exhibit near the building entrance that features the front page of one newspaper from each state each day. You can see them online, but it’s not the same as checking them out in person, all lined up next to one another. Plus, I figured there’d be a nice crowd there today, all interested, like me, in seeing how newspapers played bin Laden’s death. 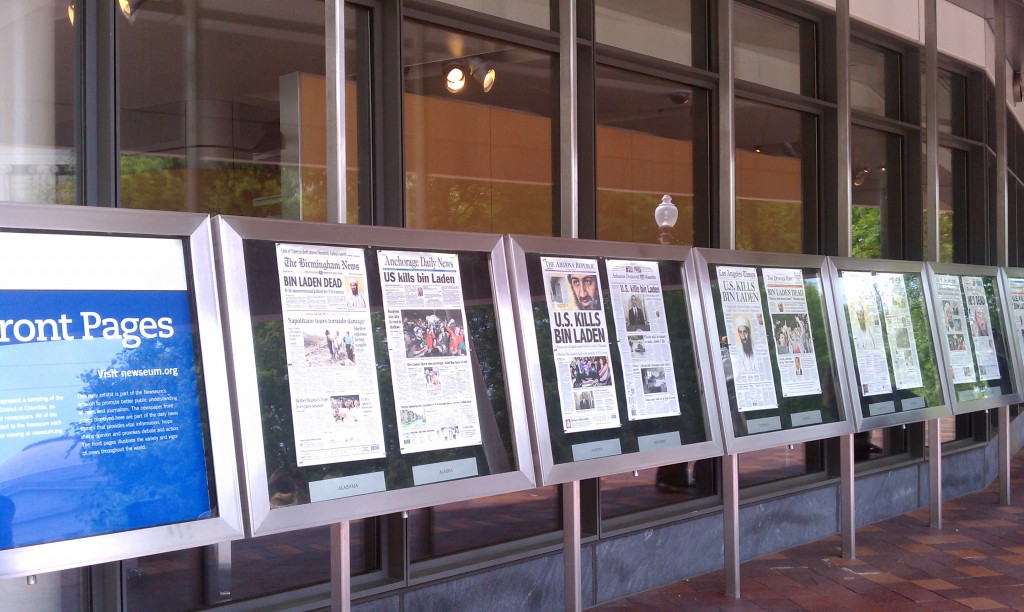 Of course, “playing” stories in the newspaper is a dying art. The most important stories still go above the fold, yes, but so many people now get their news online, where there is no fold, only a constantly updated stream of news. I love grabbing the print version of the paper to see where editors played certain stories; it offers insight into what news they thought was most important when the paper went to press. That often changes by the time the paper hits your doorstep, which makes the print version even more interesting. The newspaper is a snapshot of one moment in time, a snapshot that gets lost with real-time online news.

Most of the headlines today read, “U.S. Kills Bin Laden” or “Bin Laden’s Dead” or “He’s Dead” or, in one case, simply “Dead.” Nearly all of the newspapers featured a portrait of Osama, and many included a photo of Americans celebrating in front of the White House last night (while I slept blissfully less than three miles away). 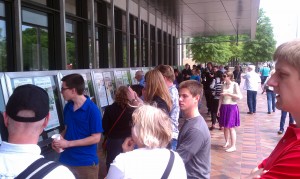 Crowds at the Newseum for bin Laden front pages.

Two newspapers among the more than 50 on display didn’t include anything about bin Laden; they must have heard about his death after their print deadlines (the news did break rather late last night).

Then there were a few stand-outs: the Omaha World-Herald went with “Justice,” and the Daily News chose the classy “Rot in Hell.”

One other interesting side note: When I opened foursquare on my phone to check in at the Newseum (explanation for non-users: foursquare is a location-based social network used mainly by tech geeks), one of the most popular “locations” was “A Post-Osama Bin Laden World.” Twenty-three people had checked in there.

Here are a few of the more interesting front pages:

Full-page portrait from my former employer, the Houston Chronicle: 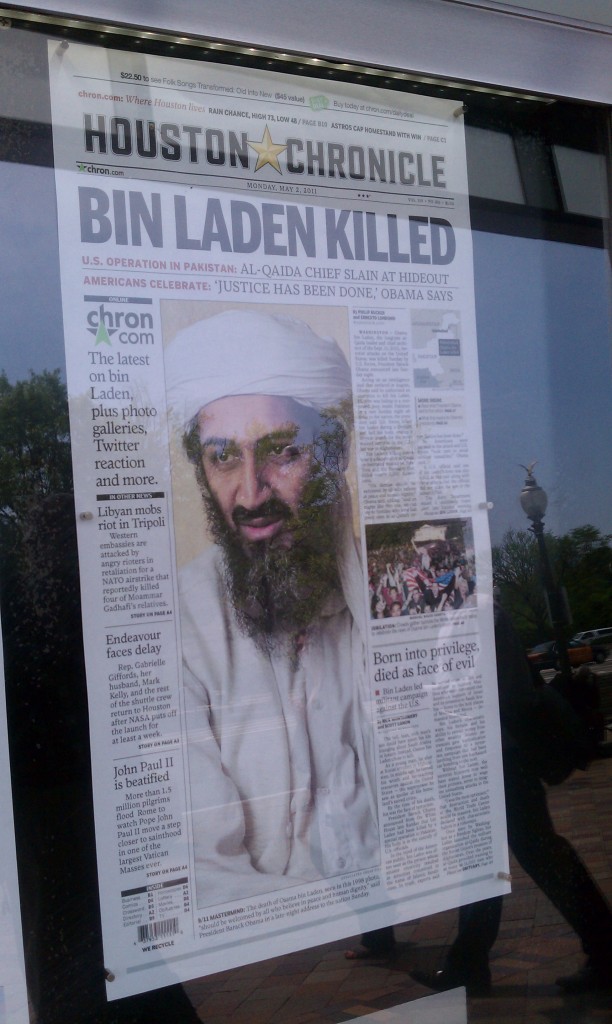 Dead, period. Doesn’t get much more simple than that: 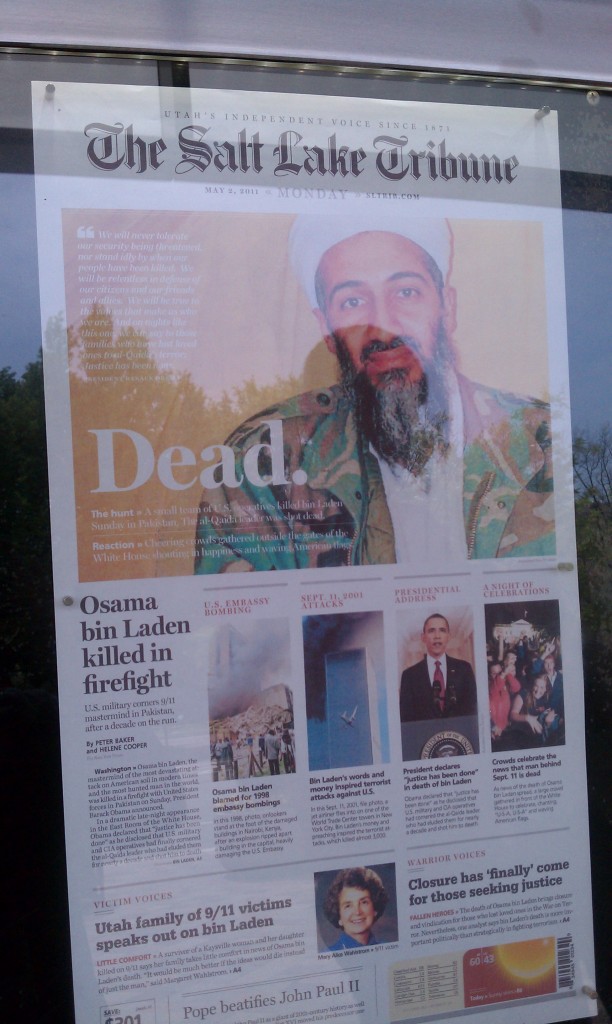 The most out-there headline (This actually wasn’t on display at the Newseum. I took the photo in my office, which explains the Subway ad.): 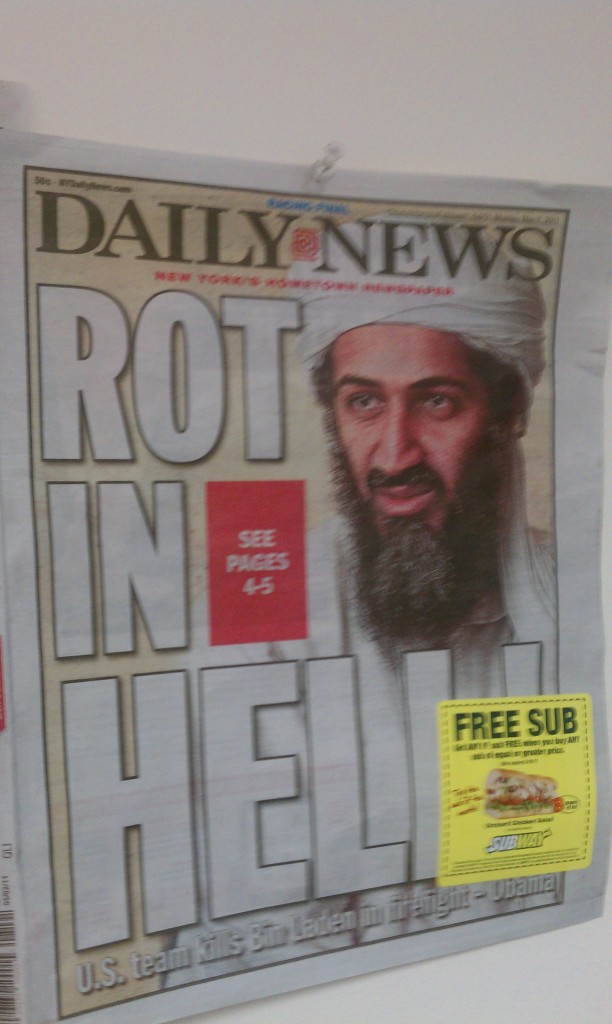 Which of these newspapers looks not like the others? 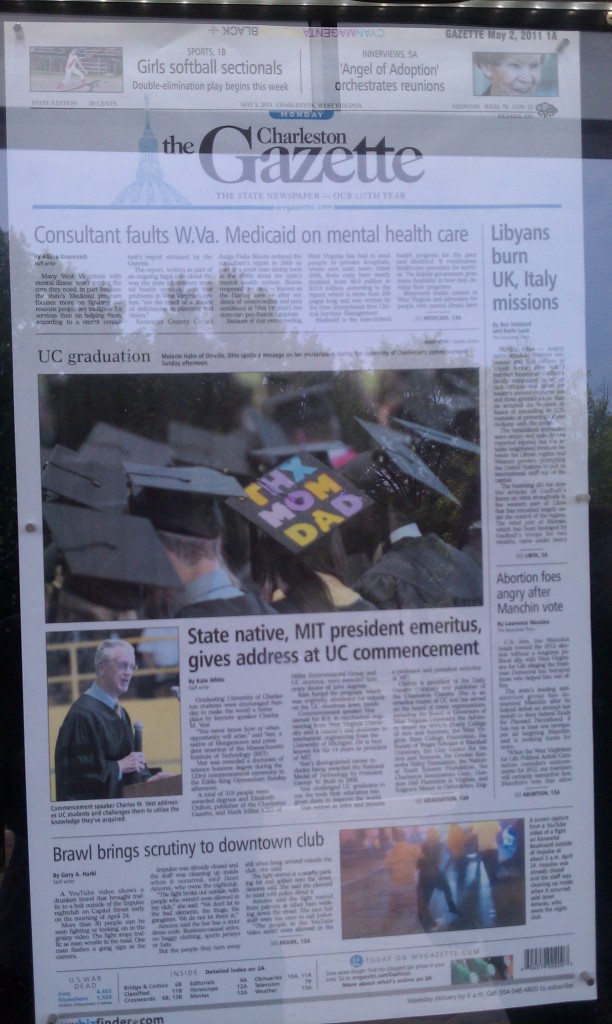 And we’ll end on a classic: 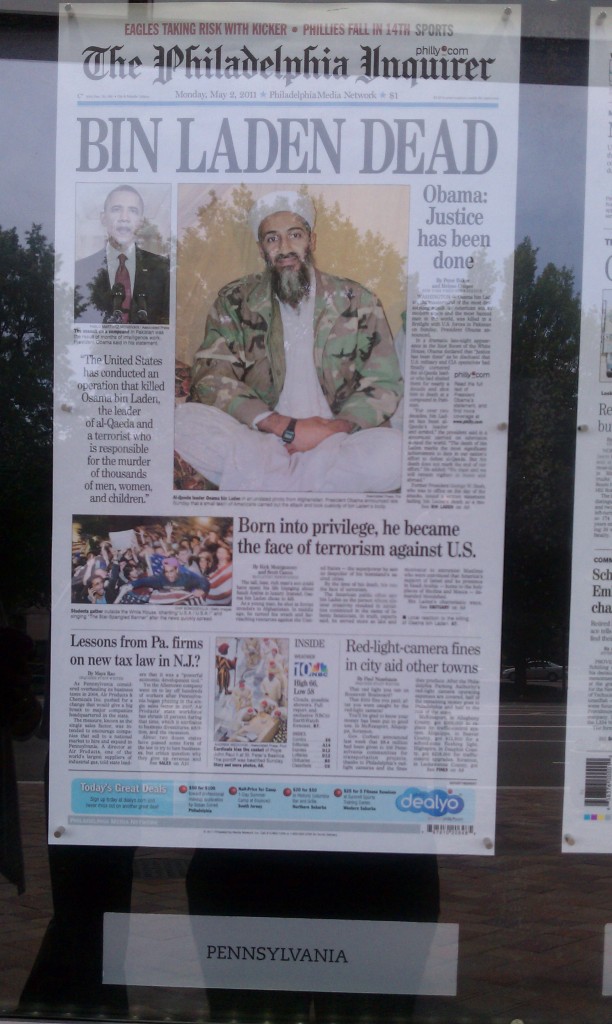 What would help you take a career break?