How to Tell Between Good Fear & Bad Fear

We all know what fear feels like. It’s a ball in the pit of your stomach, a nausea-inducing throb in the gut. But how do you know whether you should listen to that fear because it’s a sign that you’re making the wrong decision — or whether you should tell it to take a hike?

Good Fear, the kind that you should listen to when it screams RUN! often feels oh-so-similar to Bad Fear, which you have to ignore anytime you leap outside your comfort zone. So similar that it’s nearly impossible to tell them apart. 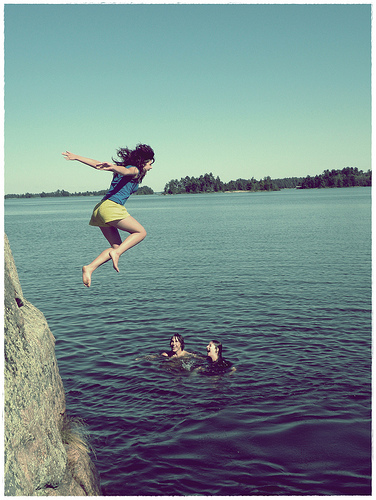 Sometimes a friend's waiting for you in the water, but sometimes you're making the leap on your own.

In the weeks leading up to my decision to quit my job, I had a horrible feeling in my stomach. I was scared about making the right choice, scared about telling my boss, scared about leaving behind a reliable paycheck. It probably didn’t help that I was sad about things going on at home, but I can’t remember the last time I felt that much anxiety.

I had to remind myself every day that when you’re preparing to take a big risk, anxiety is normal.

And yet I still had days when I worried that I might actually be ignoring Good Fear. Was I feeling that way because I was about to make the wrong decision?

So here’s what I did: I pushed aside all the fear, both the good and the bad, and listened to my gut. Somehow, while the rest of my body couldn’t tell left from right, my gut knew which choice to make.

Of course, even once your gut tells you what to do, you still have to do it. But letting your gut have a say, being in tune with the power of that message, is the first step toward making the right choice.

Sometimes, listening to your gut is the only way to differentiate between fear that’s keeping you alive and fear that’s preventing you from really living.

When was the last time you had to differentiate between Good Fear and Bad Fear?

12 Replies to “How to Tell Between Good Fear & Bad Fear”

99Designs: A Fun Way to Get Your Stuff Designed

How It Feels to Leave Your Job & Work for Yourself