The Juicy Money Details Behind Leaving My Job

Writing this post is what convinced me to start Solopreneur Secrets, a weekly letter about transitioning from employee to free agent. Check it out if you haven’t already.

Last week I spent an hour Skyping with this guy. We’d never talked before. He saw an interview with me about becoming a slasher, felt like we had something in common and messaged me through LinkedIn to see if I would take the time to chat.

(You should do this, too. Email someone who looks interesting and ask if they wouldn’t mind telling you a bit more about what they do. It’s a proactive, smart way to network, and interesting people are more accessible now than ever because of social media. This is what I like to call Making Your Own Luck.)

One of the things he asked me about was how I made the transition financially from working for an employer to working for myself. This is what everyone wants to know. No one asks right off the bat, because it’s kind of taboo, but inquisitive minds usually broach the topic once we’ve talked for a while about other obstacles to self-employment. They often want to know because they’d like to make this Leap themselves, but giving up a consistent paycheck can be scary. 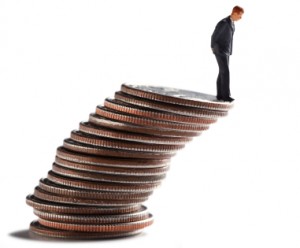 Financial cliffs are the scariest kinds.

At least it was for me. That’s why I called Jenny Blake after she left Google to become a solopreneur and asked her how she thought through how much money she needed to live comfortably and how much she would make on her own. Because one of the best ways to get where you want to be is by asking other people who’ve done it successfully what worked for them.

In fact, I ask this question a lot. Every time I go to an artist’s colony, one of the first questions I ask other fellows is whether they have a day job that subsidizes their artistic habit or whether their art is their day job. (Most subsidize.) I’m fascinated by the intersection of passion and work. Is it better to make money off doing what you love, or to get paid for something else so you can afford to do what you love?

After all, when it comes down to it, all the talk about taking a Leap and following your dreams and doing what you love means nothing if you can’t pay your rent. I wish that wasn’t true, but oh, it is.

That’s why I want to share how I made the financial transition to working for myself — because I know you’re interested (and too polite to ask), and because it will help you work toward your own goals.

Before I left my day job, my total income was 3x. My day job income was 2x, and my side biz income was x. (I’ve said publicly that I made more than $2,000/month from my side biz while I was working my day job, so if you’re good at algebra and care what I was making, you could figure it out. I’m withholding that detail to preserve the self-dignity of all the underpaid journalists out there.)

So, my day job paycheck accounted for two-thirds of my income, while my side biz accounted for a third. At several points, I had offers from potential clients that would add to that side biz income, but I found myself in a Catch-22: I couldn’t take any more work without leaving my day job, but each potential new client alone wasn’t enough to replace my day job income.

Two factors finally swung the pendulum toward the land of self-employment.

First, one big client (big as in they wanted me to do a lot of work on a consistent basis) came along that offered to pay me x — half my day job income. That meant I’d have a decent-sized, consistent paycheck, albeit one considerably smaller than the consistent paycheck I was used to. The benefit (aside from being excited about the project) was that I’d only spend about 20 hours/week on this account, which would give me hours to work on my eguides and courses and books, where my passion lies lately.

Second, I saved up a decent amount of money. For a year, I lived off my day job income and saved all the money from my side biz — putting away about one-third of my income. That savings provided a safety net that gave me peace of mind about leaving the day job paycheck behind.

When I first left my job, I was making x from the side-gig-turned-full-time-gig and x from the new big client. In other words, I was bringing in a total of 2x, two-thirds of my previous total income but about the same amount as I’d gotten paid at the day job. And since I’d been living off my day job income, 2x was enough for me to live comfortably (but not save).

If you’re still reading, you now realize I took a pay cut to become a free agent. A pretty big one.

But I did that with the hope and expectation that in the near future, I’d boost that income back up to 3x. And guess what? Just two-and-a-half months after leaving my job, I’m almost there.

Here’s the thing: I couldn’t have gotten close to 3x with the social media business if I hadn’t left my job, because I didn’t have the time to take on more clients. It was impossible to jump from 2x + x (day job + side biz) immediately to 3x (my own biz). I had to take a pay cut initially to give myself time to build up to 3x through my business.

If you never take a risk, you’ll be comfortable, but you probably won’t move ahead all that much.

If you take a risk, however, you have the potential to reap serious rewards.

In truth, I’m not in this for the money. I’m a lifestyle entrepreneur, working for myself to create the life I want to live. A client-based business is unlikely to ever make me rich. But it feels pretty damn good when money is part of the picture, too.

What other questions can I answer for you about the financial implications of self-employment?

P.S. If you read all the way to the end of this post, Solopreneur Secrets might be right up your alley. In the weekly letter, there are no Xs, only real figures — plus lots more.

16 Replies to “The Juicy Money Details Behind Leaving My Job”