If you've followed this blog from the beginning, you might remember a post in late 2008 when I asked for your help.

I was visiting a family in Cameroon that had hosted me six years before as a college student. It was a polygamous family, with four wives and about 20 children. And this family was mourning the loss of their father, who had long provided for them, both emotionally and financially. (This family, by the way, plays a big role in my travel memoir.)

Without Father, this family was struggling to pay the fees required to send their children – who ranged from age 8 to 21 – to school.

That's where you came in. You helped me raise $1,400, enough to send all of the kids to school that year, plus pay for all their books. In fact, that even turned out to be a bit of extra money, so we paid school fees for three other children in their community as well.

On top of that, one generous friend sent a huge donation the following year, to help the kids go to school yet again.

Since then, I've gifted the family money each fall. In addition to knowing this family personally, I'm in close communication with one of the eldest sons, who oversees payment of the funds to the schools, so I'm confident it's going toward the right cause. (Because that's what everyone asks when they find out I send money to Africa.)

In return, that son sends me something I never asked for but fully appreciate: reports on the children's grades.

Most of the children are passing their classes, and several have even gone onto college (which means more fees). But once in a while I'll get a note that really makes me think about just how lucky I am.

Last year's note even made me cry.

I'd grown to love one of the girls in this family, a teenager named Regine. Actually, here's a photo of us together. This makes me laugh because she's wearing my clothes – clothes I left in the village in 2002 because they were so worn they weren't worth bringing home. She was still wearing my outfit when I visited in 2008: 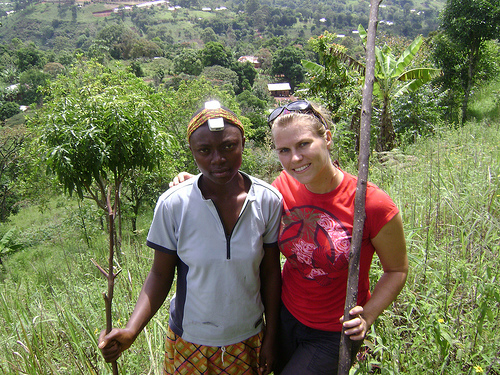 Hiking in the village with Regine. (That’s a cell phone on her head.)

Regine is good-natured and optimistic and fun. And she has an entrepreneurial spirit. Several times during my last visit, I found her rolling balls of a sugary mixture and letting them harden to become candy, which she then sold around town to earn some cash. Smart, right? And scrappy. That's a lean startup if I ever saw one.

Yet Regine, like many girls across Africa, was behind on her classes, not even close to the grade level where she should've been for her age.

The reason girls don't do as well as boys in school is because they don't get to go as often. Girls are responsible for cooking meals, looking after younger siblings, caring for the sick, tending the fields and collecting drinking water. Yes, they also get to go to school – as long as those other responsibilities are taken care of.

On top of that, girls in Africa often stay home from school when they have their period, because the lack of indoor plumbing leaves them with no way to stay clean.

In other words, the odds are completely stacked against them.

This particular family, my Cameroonian family, has done a pretty good job of keeping the kids in school as long as possible. And my annual gifts help them continue to do that.

But back to last year's grade report, and this teenage girl, Regine.

Three years after my last visit to the village, the son who oversees this entire operation let me know how his siblings had fared in school. Most had passed their final exams and were moving onto the next grade. A few hadn't done so well and would repeat a year (which seems to be much more common there than it is here).

And then there was Regine, who had decided not to return to school next year and to become a seamstress instead.

I'm crying over that even now, as I write this blog post.

Becoming a seamstress is probably a smart decision for this young woman in many ways. She is fabulous at sewing – she created many of the family's mourning outfits from just a sheet of fabric. And sewing is one of the most popular ways for women to make a living in Cameroon. Most of the clothes people wear there are custom-made, so they need a lot more seamstresses there than we need here.

Regine will become a sought-after seamstress, and she'll make her family proud.

But I can't help think that she could become more. That if she'd made it out of elementary school and into high school or even college, she would greatly improve her odds of success in life, even if she then decided to use what she'd learned to start a sewing business. She deserves an education not only for the job and money and status it would help her attain, but simply because it would help her become the best person she can be.

These are the kind of life realities that make you realize just how good you have it.

And when you realize how good you have it, you're more likely to feel the urge to give back.

So guess where my $100 from the World Domination Summit is going? It's going to my family in Cameroon, to help those kids keep going to school.