We’re about to chat with an author whose book is on my bed-side table at this very moment. Excited!

Unlike many of the interviewees who land on this blog, Dana Bate is an IRL (In Real Life) friend, although I now follow her online, too. We went to journalism school together, and I’ve eagerly followed Dana’s career as both a TV journalist and a writer. It wasn’t long ago that Dana and I sat down over sushi to discuss the best way for her to land a literary agent — and now her first novel is on shelves: The Girls’ Guide to Love and Supper Clubs. 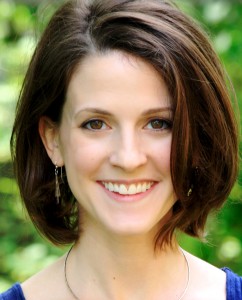 Not only on shelves, but published by a major house, both here in the U.S. and overseas. Dana, who is kicking it in the social media world with a Twitter feed, Facebook page and newsletter, has offered to let us in on the publishing process and what she’s learned as a debut author.

Welcome, Dana! First, tell us a little about your book.

Dana: The story is about a twenty-six-year old woman named Hannah Sugarman who is having a quarter-life crisis. On paper, she seems to have it all: impressive job, brilliant boyfriend, famous intellectual parents. But all Hannah cares about is cooking, and no one takes her passion seriously, which paralyzes her.

When her relationship falls apart, Hannah decides to start an underground supper club out of her new landlord’s town house, which is her way of bridging the gap – she can stay in the DC think tank job her parents and others approve of, while running an underground restaurant on the side. Of course, that's easier said than done, especially when her underground venture is not, technically speaking, legal. In the end, it's a story about a young woman figuring out how to follow her dreams and discovering who she really is.

From the outside, it seems like this went so smoothly for you — signed with an agent for your first novel, picked up by a big house, published internationally. Was it really that easy? (Puh-LEASE tell us it wasn’t.)

Ah, if only things were as easy as they looked on paper. Admittedly, the first part of the process did happen fairly quickly. I started sending out my manuscript in February 2011, and by May I had an agent. There were, of course, some revisions that happened between February and May, due to the suggestions of other agents and the one I ultimately chose. But my agent started sending out the manuscript in June, and within a few weeks I had two offers, one of which was from Hyperion, my publisher. Easy, right?

Wrong. A few months later, in September, I got a note from my agent: the agency was restructuring and, as part of that, was letting her go. I was crushed. I loved working with her and felt as if she “got” my story, which is why I'd chosen her in the first place. Since the agency had already sold my book and negotiated the contract, I was able to stay with the same agency, only with a different agent. So in that sense, everything ultimately worked out, but losing the first advocate for my book was still very stressful and upsetting.

Then – as if that weren't bad enough – three months later I got a call from my new agent saying my editor was heading to another publishing house for an executive editor position and couldn't take me with her. All I could think was, “First my agent, now my editor?? Are you joking?” I'd already signed a contract, so my book wasn't in jeopardy, but my editor had been a huge fan of the book and really understood what I was trying to do. At that point, I'd lost the two biggest advocates for my book, and I was heartbroken.

The good news is that most of the heavy lifting had been done as far as revisions go, and a new editor swooped in and took over, and she and I got along very well. But still: there were definitely some big bumps on my road to publication. It wasn't all rainbows and butterflies.

How did it work selling foreign rights? Was the process for publishing overseas different than here in the States?

My agency has a fantastic foreign rights division, so they dealt (and continue to deal) with selling foreign rights. In terms of the publishing process, for most markets, I've had very little contact with the publisher, other than approving cover art. They basically just translate the approved US manuscript.

In the UK, however, I had much more contact with the editor and publicist, and I loved working with both of them. They were so enthusiastic about my book that they wanted to release it two months before the US version came out, which ultimately they did. That enthusiasm bled over into the launch, which was fun – and much more relaxing (for me) than the US launch, probably because it was happening thousands of miles away. 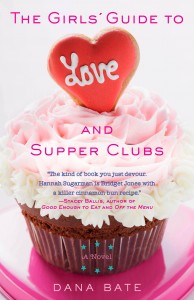 The Girls’ Guide to Love and Supper Clubs

Speaking of the UK, the US and UK titles of your book are different. How did that happen?

I actually wish the titles were the same, but publishing my debut has been a crash course in book marketing and publicity. I assumed what would work in one English-speaking country would work in another, but that isn't always the case! What's funny is that neither was the original title. My original was The Dupont Circle Supper Club, but both my US and UK publishers felt that title was too specific – either too specific to Washington, DC or too specific to America. They both agreed that they wanted to keep “supper club” in the title, since the supper club is such a central part of the book, but they took different approaches in how to use it. Personally, I'm still attached to the original title (which appears in the story itself), but that's probably just me being precious!

What’s your promotion plan? What, if anything, does your publisher do for you, and what are you doing on your own behalf?

My publishers sent out galleys fairly early to various long-lead publications, as well as trade magazines like Publishers Weekly and Kirkus. More recently, they've reached out to weeklies and dailies. I also hired an outside publicist to extend my reach with long-leads and on the web (she arranged my blog tour, for example). Hiring an outside publicist was an extra expense, and not cheap, but I'm glad I did it.

In terms of what I'm doing on my own behalf, I've contributed guest blogs and articles to writing and food outlets, and I also regularly contribute to The Debutante Ball, a blog for debut authors. Being selected for that was a great way to raise my profile. And, of course, I'm on Twitter and Facebook all the time, connecting with other writers and foodies, which has helped with my visibility as well.

Did anything surprise you about this whole process?

This process was full of surprises! In terms of good surprises, I was touched by how many established authors were willing to take time to read my book and offer advance praise and support. I expected everyone to be too busy but was pleasantly surprised. I was also surprised at how lovely and generous many in the industry have been. An editor who received my manuscript and wanted to buy it (but ultimately didn't get the green light from her superiors) emailed me a few months ago to congratulate me on my Publishers Weekly review. I couldn't believe she even remembered who I was! Her email warmed my heart.

In terms of less pleasant surprises…there have been a few of those, too. I hadn't realized how much is out of your control as a debut author. I'm sure aspects of the publication process are out of Stephen King's control, too, but at various points in the process, I definitely felt my place at the bottom of the totem pole.

What are you working on next?

I recently sent my second book to my agent, so I hope to have more news on that front very soon! It's a stand-alone novel, but for those who enjoy my first book, the second will have some of the same ingredients: humor, relationships, family, and, of course, food.

Thanks for joining us, Dana!

If anyone has questions, feel free to leave them in the comments.

4 Replies to “Q&A: Dana Bate on Publishing Her First Novel”

Could You Do Me a Quick Favor?