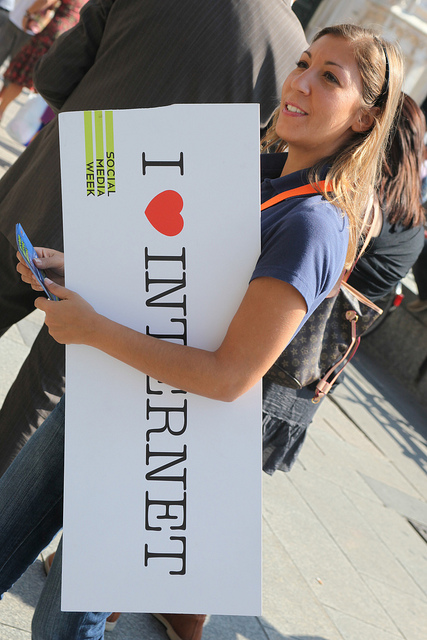 Yup, the Internet can actually help your writing career.

The column revolved around a topic that seems to gain steam every few months: whether writers should write for free. The author, essayist Tim Kreider, argued, quite emphatically, that the answer is no. He even went so far to encourage his less experienced peers to turn down unpaid writing opportunities “as a matter of principle.” He advised, “Do it for your colleagues, your fellow artists, because if we all consistently say no they might, eventually, take the hint.”

This would be a great call to action if it weren’t for one tiny detail: The world of work — especially writing — has changed.

We no longer live and work in the world Kreider remembers. Most publications don’t pay, much less pay well, for quality articles, and they’re not going to return to their old ways simply because a small group of Kreider fans stop writing for them.

In fact, no longer writing for publications that don’t pay is pretty much the WORST thing young professionals can do for their career. Abiding by the rules of the old workplace, the one we lived in before the Internet changed everything, will do you absolutely no good. Instead of following Kreider’s advice and complaining about low rates, what writers should do — not to mention Kreider himself — is make that new economy work for you.

What? Think differently? Come out of denial mode?

Yup. Making the new economy work for you means coming to terms with the fact that you’re never going to get paid big bucks for writing alone. The reality is that to make a living as a writer today, you have to be more than a writer. You have to grow a community around what you create, you have to promote your work (no matter how much you don’t want to), and you have to think outside the box about how you earn.

Writing for free helps you gain visibility and develop a network of people who will actually pay for something you offer, so long as you’re smart enough to monetize that opportunity.

Here’s an example from my own career. Mind you, I have been published in lots of well-known publications, both traditional and new-age, including the Houston Chronicle, Salon, U.S. News & World Report, Lifehacker, Problogger and The Chicago Tribune. Yet I still write for free because it helps me make a living.

Mashable doesn’t pay for my posts,** but they do link to my site. If I sat around complaining about why they don’t pay or worse, simply didn’t write for them, I’d be broke. Instead, I monetize the opportunity. The link goes to my newsletter, and many of those newsletter readers later purchase my ebooks and courses, from which I earn thousands of dollars each month.

(This model gets tricky for journalists, who must remain impartial and can’t link directly or indirectly to anything that might help them make money. But plenty of writers who produce free work aren’t journalists, and even those like Kreider who freely express their opinions have some wiggle room.)

Kreider* himself proves my point in this killer of a paragraph:

It’s especially hopeless for those whose work is easily digitized and accessed free of charge. I now contribute to some of the most prestigious online publications in the English-speaking world, for which I am paid the same amount as, if not less than, I was paid by my local alternative weekly when I sold my first piece of writing for print in 1989. More recently, I had the essay equivalent of a hit single “” endlessly linked to, forwarded and reposted. A friend of mine joked, wistfully, “If you had a dime for every time someone posted that …” Calculating the theoretical sum of those dimes, it didn’t seem all that funny.

Wait, so his work is easily digitized (remember: digital work has high profit margins), gets tons of traffic and is often shared? I wanted to poke my eye out when I read this, because he SHOULD have had a dime — or ten dimes or even 100 dimes — every time someone clicked over to his story! Can you say MISSED OPPORTUNITY?

To all the Kreiders of the world, I say: stop complaining, stop asking others to complain with you, and start figuring out how to make money in the new economy. We’ll all be happier if you have more cash in your pocket.

*Mashable actually does pay for posts, $100 last I checked — but only if you don’t include a link in your bio. That link is far more valuable to me than $100.

**I have absolutely nothing against Kreider other than the amount of hair I pulled out while reading his column.