What It Takes to Live the Life You Want

Last week my soon-to-be husband left for a two-month, 3,500-mile bike trip on the West Coast. His brother is joining him, and they’re calling it #NoRestOutWest.

Friends and family keep asking if I miss him, and of course the answer is yes. But missing him isn’t the overwhelming feeling in my gut right now. What I really feel is PROUD.

Know how I took a career break at age 27 to travel through French-speaking Africa? (Many of you have been reading this blog since that trip in 2008!) Well, it’s even more difficult to make that decision now.

It’s difficult because it’s not what everyone expects you to do in your 30s: spend nine weeks cycling through the mountains, sleeping in a tent, bonding with your brother. What everyone expects — and especially here in the U.S., my British fiance tells me — is that once you get on the career ladder, you never get off.

What it takes to beat the status quo

This applies ten times over to the corporate world Ben just left. Most employees don’t take weekends off, much less two whole months. And when you’re surrounded by that standard, as most of us are, it puts a certain pressure on you. To conform. To color inside the lines. To keep driving at the same speed as everyone else, even if it feels like the wrong direction.

In the few weeks before he left, Ben would tell me he felt guilty. Guilty for stepping away from it all, as though he had severed a cord he wasn’t supposed to cut. Guilty for doing something different. Guilty for letting down people who expected him to keep on chugging in his “good job.”

“Who exactly are the people you’re letting down?” I would ask. (Because clearly, the woman he’s marrying is not incredibly impressed by the Joneses.)

He couldn’t name them. That’s because no one in particular had told him outright that he shouldn’t leave his job for an adventure. It was an unspoken feeling that choosing an alternate lifestyle was wrong, that deviating from the path everyone else seemed to take was a bad idea. That feeling was strong and dominant, a bully. It tried to push him around until the day he left, and I imagine it still lurks occasionally.

Can you see why I’m so proud? Because despite that force, despite that muscle-y magnet of a status quo, he followed the dream anyway.

I know how hard that is because I did it, too. I left a great job to travel when most of my friends were looking for promotions or getting married or having kids. (Look, I turned out okay!)

Ben made some similar choices around the same time. He took a career break to cycle across Norway and later walked across Spain. But just because he did it before didn’t make it an easy decision this time. Now, at 33, he has a mortgage to keep up with, and soon, a wife. These things — plus other life decisions we’ll make in the coming years — will tie you down if you let them.

So how do you get past that status quo bully?

Society does not make it easy to go against the grain. Right now, as you read this, you might be feeling the urge to do something different. You might want to take a leap, but can’t get over the constant push-back that keeps you in place.

Here’s my advice: ignore everybody.

Who cares whether the person next door thinks you’re a slacker? Or the gal in the cube on the second floor gossips about how you can afford to take time off? (The answer, by the way, is you set priorities and worked your butt off.) This life of yours is meant to be lived!

Except… that approach doesn’t always work. I’m pretty damn good at ignoring everybody, but not everyone feels comfortable doing that. So here’s an even better option: surround yourself with go-getters. Do not let that gossiping gal in the cube define your normal. Find other people who think it’s amazing that you’re giving the status quo a big FU, and hang out with them — even if you can’t do it in person, even if it’s only online. These people will help you approach life the way you want to.

You can start right now, by leaving a comment on this (handsome) cyclist’s blog, telling him not how crazy he is for following a dream amidst the responsibilities of 33, but how you support his quest to live in a way that makes him happy, and how you’re doing the same.

We have to cheer each other on, us go-getters. We have to keep reminding ourselves that living differently is not only okay, it’s pretty freakin’ awesome. 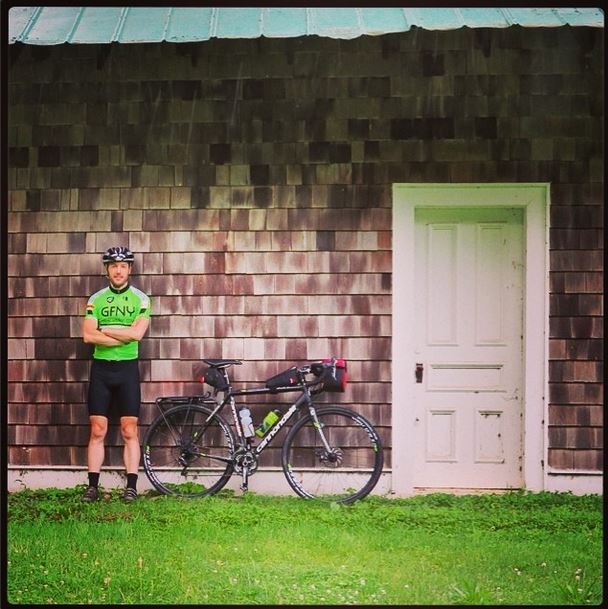 P.S. If you want to take a career break, here are all my posts on the topic.

When Life Beats Out Business: A Reflection on #WDS2014

The Brutal Truth: No One Will Pay You to Just Write