To Meet Your Goals, Surround Yourself with Go-Getters

Last night as I was leaving the gym, I listened to a new voicemail from a friend. “You inspired me,” he said. “I quit my job!”

My jaw dropped. Eyes widened. I’m all about living for your dreams and I love that my most recent Leap has inspired others to do the same but… He quit his job?! Suddenly I wondered how many other readers had up and quit, too. Anyone? Anyone?

I strongly believe that if you want to quit your job, you can find a way. But here’s my parental side kicking in: Before you quit, have something else lined up, whether it’s another full-time job, a plan for self-employment or some other out-of-the-box setup. (And yes, my friend did. Phew.)

That means until you’re at the point where you have a plan, use your job to get where you want to be. This is what I like to call Scheming: turning your hopes into action. In other words, giving yourself a kick in the ass.

The difficulty is knowing when you’ve crossed over from I-want-to-quit-but-I’m-not-quite-ready to hell-yeah-I’m-prepared-let’s-go. Because you will never feel totally ready. You will feel anxiety until the moment you make the decision. You will not be able to tell Good Fear from Bad Fear.

And yet, there’s something comforting about knowing that it can be done. That I didn’t combust after quitting my day job, and that I feel happier than ever this week, even though I’m still figuring out where part of my income will come from. (I’m planning a more comprehensive post about the financial side of this, by the way, because I think that’s the scariest part about making this sort of life change.) Even though my career is entirely different than my friend’s, seeing that it could be done set a fire inside him. 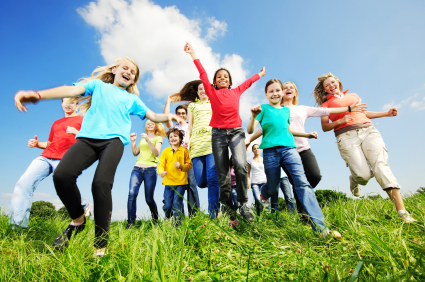 Who doesn't love being surrounded by enthusiasm?

In fact, now that I’m writing this post, I’m realizing that I had someone who went before me, too, a go-getter who showed me it could be done. My friend Jacci, who has become both a business partner (we share a client) and a sounding board for my projects, quit her full-time journalism job a month or two before me to grow her social-media strategy business. Having her support is partly what made my transition feasible — at least in my mind.

The truth, of course, is that we all have guts buried inside us, but sometimes it takes a friend to lure them out.

When I told Jacci she played a role in my decision, she said she felt like she was able to make the transition partly because she had her husband’s support. Which means her husband is responsible for her Leap, my Leap and my friend’s Leap, right?

My point here is that for whatever reason, it’s easier to make Leaps when people around you are making them, too. That doesn’t mean you should defend the status quo just because you have to be the first in your circle to live outside your comfort zone. But it does reinforce the importance of surrounding yourself with people who not only support your dreams, but also follow their own.

So whether you find them in the next cubicle over, at an event that’s intended to inspire or in the blogosphere, seek out people who stuff their lives full of awesome. Before you know it, you’ll be brimming with awesome, too.

Speaking of, can I get a what-what for this community of awesome? Because you all have inspired me over the last two weeks with your stories in the comments. I love all the Scheming going on here!

18 Replies to “To Meet Your Goals, Surround Yourself with Go-Getters”