Why feeling lost is the same as finding your way

I like to keep this blog upbeat. Optimistic. Positive.

But the truth is, I feel lost. I’ve got a lot of great things going for me — I know that. I’ve got my book. My new business. A life of exciting things ahead. 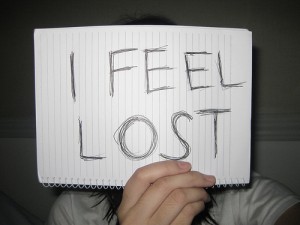 Anyone else feel lost? (From simplesilhouette on Flickr's Creative Commons.)

In short, I don’t know what I want.

Journalism has been the driving force in my life since college. It’s always determined where I’d live and what I’d do. I loved journalism, which made those choices easy.

But I’m realizing now that journalism might not be in my future. The reason is complicated, having to do with the state of the industry, and is worth saving for another post. But the point is, without this driving force, I feel lost. As much as I love writing my book, as much as I love building my client base for Socialexis, I still feel like I’m lacking direction.

Here’s what I do know: I need to move out on my own. It’s been great living with my parents while writing my book, but I’m antsy to get into my own place. And so I ask myself, what’s the fastest way to meet that goal? Not building a business. Not hoping I’ll make money off my book. No, the fastest way to have enough money to move out is to get a full-time job. But where? What’s the point of getting a full-time job to pay for a place when I don’t know where I want that place to be?

There’s one more piece of this equation, and that’s something I’ve always known I’ve wanted: a family. For the last few years, I haven’t felt ready for that. Good thing, since I don’t have anyone to have a family with. But now that I’m watching my close friends get married and have kids, I’m realizing that I do want that. Soon. And it ain’t gonna happen if I’m living in my parents’ house.

So I ask myself the same question I’d ask you if you told me you felt lost. If I could do anything I wanted at this very moment, what would it be?

I think I’d hike the Appalachian Trail — and write a book about it. Then why aren’t I doing that? Because I’ve got to refill my bank account first. That’s the same reason I haven’t moved out on my own. Life choices, unfortunately, often come down to money. And I spent all of mine traveling in Africa.

So I want to hike the AT. At the same time, if the right job came around tomorrow in, say, New York City, I’d take it. Which is the story of my life right now. A zillion choices and a zillion things I could do. I could go in any direction.

I’m so lucky to have that freedom, the chance to choose any direction. I realize that. But freedom can also be scary. This is only the second time in my life that I don’t know what I want. (The first was while traveling — but at that point in my life, it felt more freeing than intimidating.) And I don’t like not knowing.

This is not something I’d normally share with the world. Actually, sharing with the world, with Internet friends, isn’t the hard part — it’s knowing that people who read this blog will look me in the eye later today and say, “I saw your post about feeling lost,” and then expect me to talk about it. It’s easier for me to write about how I feel than to talk about it.

But since I’m trying really hard in my memoir to be soul-baringly honest, I figure this blog can serve as practice. So I’m soul-baring. I don’t feel very comfortable with it, but I’m doing it.

Plus, one of my favorite bloggers, Penelope Trunk, has been writing lately about being lost, and she helped me realize it’s okay to not know where I’m going. She brought up a good point: that there’s beauty in being lost, even if you have to look hard to see it. For me, I know the beauty is that feeling lost brings out the creativity in me, brings out my potential. I believe, for both me and all of you, that being lost usually means something great is around the corner. Because being lost also means you’re finding your way.

When I read those two posts from Penelope, I thought to myself, that woman is crazy. Crazy, crazy.

And now, I realize, you’re probably thinking the same thing about me.