When you feel lost, look out for your lifeline

The universe has a way of throwing us a lifeline when we need one.

Not long after I blogged about feeling lost — and got so many encouraging comments from you all — an e-mail appeared in my inbox from The Hambidge Center. Does the name ring a bell? Hambidge is the artist’s colony where I spent time as a writer-in-residence last year. They offered me a two-week stay in September. Yes, as in this September. This month. Like, in two weeks.

Because I’m a believer in making your own luck, I should point out that I e-mailed the folks who run Hambidge, asking whether they had any openings, knowing they sometimes let former fellows fill in when there’s a cancellation. The universe is more likely to throw us lifelines when we ask for them. But it’s still a bit of magic.

I so need this. I need time to myself, in the woods, time to think and reflect and figure out where to go from here. My book needs it, too. I’m approaching the finish line for this round of revisions, and I’ll complete them in two weeks at Hambidge.

If you weren’t a reader of this blog last year, a quick recap of my five weeks at Hambidge: Background on the residency program, where I had my own little studio in the woods, met some awesome writers and artists who inspired me to create, and learned to enjoy the writing process. I also fell in love at Hambidge — with a dog. 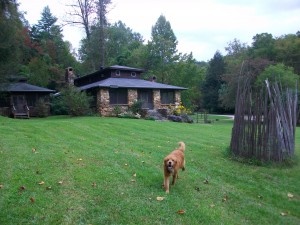 The Hambidge Center. And Cooper, a stray dog who ended up coming home with me.

The tricky part about going to Hambidge this time around is that I’ve now got a job to think about, my new business. Internet access is limited there, and if I’m gonna go, I want to focus on my book anyhow. That means I’ll have to do a lot of preparation to get things in line before I go and take a few hours here and there during my residency to tend to my clients’ accounts.

It’s hard to believe it’s been a year since I last retreated to those north Georgia mountains. A year since Cooper, The Lucky Hambidge Dog, followed me home. Part of the reason it’s hard to believe is because I’m still working on the same book. But some writers crank out manuscripts quickly, and apparently I’m not one of them. At least not yet.

So I’m going to Hambidge! I’ll come home with a fully revised manuscript (but not another dog).

Until then, I’m taking this lesson at face value: our lifelines are out there waiting for us, we just have to reach for them.

11 Replies to “When you feel lost, look out for your lifeline”

Gah! I hope you're not subscribed twice!