Can we really have it all?

Eight months ago, when I blogged about feeling lost, a good number of you responded, saying you felt the same way. Your comments and emails made me realize just how universal that feeling is amongst people who are, by most measures, successful. So many of us feel unfulfilled, unsatisfied and yearning for more, even if we don’t know what we want more to be.

Now that I have a job and an apartment and a city and a social life, I no longer feel lost. I feel like I’m on a path. A meandering path whose end is out of sight, but a path nonetheless. And yet I still have a nagging, underlying feeling of not being satisfied. Like something’s missing.

I have a few ideas of what that something might be. It might be a life partner, because I’m feeling the tug of wanting to start a family. It might be wanderlust; I often find myself daydreaming about my next big trip. Or maybe it’s simply the desire to do so many things in so few hours. On certain days the nagging feeling disappears, like when I finish an awesome story or hit a milestone for my book. On those days, I feel a sense of accomplishment, one that fills the hole of yearning. But most of the time I wonder: What would make me happier? How can I help myself feel satisfied? 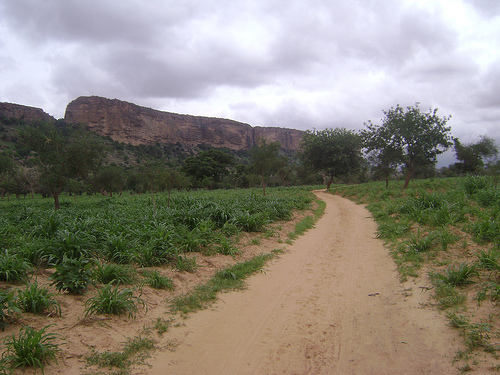 Sometimes it's nice when there's only one road.

In the midst of trying to figure this all out, a book arrived at my office. I get so many job-related books at work — from publicists and authors who want me to use them as sources — that I couldn’t possibly read them all. (Though if I ever decide to write a career-focused book, I’ll know what’s already out there!) Yet from the name of this book, I knew right away I’d want to read it: Undecided: How to Ditch the Endless Quest for Perfect and Find the Career — and Life — That's Right for You.

The authors, Barbara and Shannon Kelley, a mother-daughter pair, explore how today’s woman, with more career and life options than ever before, is often paralyzed into making no choices at all. I fall into the opposite camp; surrounded by appealing opportunities, I try to do everything. For that reason, I wished they’d titled this book, You Can’t Have It All.

Because that’s precisely their point: that women can’t have it all. That “having it all” is a myth. That expecting our job to be some sort of spiritual calling, one that’s entirely fulfilling, is a recipe for disappointment, just like thinking we can put 100 percent of our energy into a high-power career and still have 100 percent to spend on kids.

The book isn’t a downer, simply a reality check. I don’t yet have to deal with the career vs. family dilemma, yet I still struggle with trying to do it all. Career. Side biz. Blog. Socializing. Exercising. Eating right. Because opportunities are also trade-offs: If I spend the next two years working a full-time job, that means I’m not traveling. If I follow my hankering to join a tech startup, I’d have to give up journalism. And this applies on a daily basis, too: If I spend today barbecuing with friends, that’s one less day I have to work on my blog.

I’m always trying to fit everything in, always planning for my Next Big Thing. And that has an unfortunate side effect: forgetting to live in the moment, to appreciate today. “My real life was always on the verge of something else,” said one of the women quoted in Undecided. How many of you feel the same way?

But. Not going for it all makes me feel like a slacker. I want to throw myself into everything I do! Because What If I decide to hike the Appalachian Trail and it changes my life? What If I throw my energy into a book and a publisher buys it? What If today’s opportunity leads to another which leads to another? Not going for it feels like settling. And “the very word ‘settling’ carries negative connotations, far more negative than its close relative, ‘compromise,'” the authors write. “When it comes to achieving our dreams — and having it all — do we interpret accepting anything less as giving up on our potential?”

The mother-daughter author pair treats this as a women-only phenomenon, saying women have trouble making decisions because, historically, we’re not used to having these choices. In decades past, women were expected to become a secretary or a teacher or a mother, lacking the career options we have today. Now, faced with so many options, we don’t know which one to choose.

At first, I disagreed with their female-only premise; after all, I know plenty of guys my age who suffer from this same I-want-to-do-everything mentality. But then the authors made another point that does apply only to women, one whose weight I feel increasingly each day. Women's choices, they say, are more loaded than men’s. Why? Because we hear the tick of the biological clock. Each time we make a decision, we also have to factor in having children — if that’s something we want to do — because we don’t have forever to do it. I often say to one of my closest girlfriends that I wish I had two decades of my twenties, because there are so many things I want to do before having a family. Yet men my age don’t feel that pressure. Time is on their side, which, the authors of this book say, makes their life decisions less loaded.

This entire issue is one of privilege, of course. Having too many choices is a problem of the world’s wealthy, the privileged, the lucky even. But that doesn’t make it any easier to decide what to choose — and what to give up. Which is why, for so many of us, the grass always looks greener on the other side.

What’s the solution? The authors of Undecided propose an idea I’ve actually written about here before: that we might be happier if we let go of some of our dreams. Would we be better off if we held ourselves accountable for achieving our biggest dreams, rather than all of them? Are we even capable of figuring out which of our dreams are the biggest, which are most worth chasing?

What do you think? Is it possible to have it all? Could you keep yourself from trying?

Advice for a Young Writer