You know I believe in finding a job you enjoy. That if you’re working a job you don’t enjoy, one that stresses you out or leaves you feeling unfulfilled, you should figure out how to make a living doing something else. 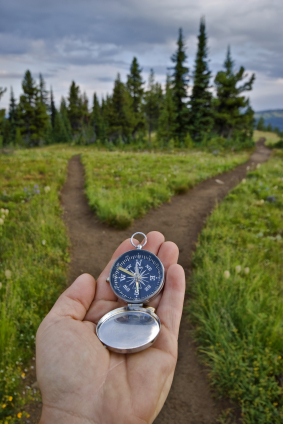 Trying to figure out which way to go?

People often ask me for advice on this front, for helping figuring out what would make them feel fulfilled.

But the truth is, I’m no good at that. I’m good at helping people make their own luck, but to do that effectively, you have to have a vision. You have to know what you want.

Perhaps this is because I’ve always known what I want on some level (even when I feel lost). It’s hard for me to imagine not knowing what I want. Having difficulty choosing between several options, that I understand. But drilling down to pinpoint deep desires and how that translates practically to your life? That’s a job for a life coach.

If you fall into this camp, I do have one piece of advice for you:

Of course, this is the absolute most difficult thing to do when you don’t know what you want. Because if you don’t know which direction to turn, you’re often paralyzed into not moving at all.

We sit still, paralyzed (but thinking, always thinking), because we’re afraid of turning in the wrong direction, of taking the wrong step.

Yet not moving at all is the worst thing you can do for yourself. Sure, you don’t risk taking the wrong step, but you also don’t give yourself even a slight chance of taking the right step.

So if you’re not sure what you want, and yet you know the best thing to do is to take action, how do you choose a direction?

Yes, I’m telling you to GUESS about your career. Don’t wait until you feel sure about what you should do. Instead, make an educated guess, and go for it.

Why guess? Because in most cases, our gut knows exactly what we should do, but our head has all sorts of reservations. And chances are, that guess will be in line with your gut, which is probably RIGHT.

When I say TAKE ACTION, I don’t mean quit your job tomorrow and start your own business. Sure, that could be smart if you’ve been building your business on the side and are almost at the point where you can sustain yourself on that income. But puh-lease don’t quit without putting the pieces in place. Before you leap, weave your own safety net. Put yourself in a position where you’re likely to succeed.

In other words, your action doesn’t necessarily have to be drastic. (Unless you’ve already put the pieces in place and are now procrastinating out of fear. In that case, go drastic!) Make your action a first step. What first step can you take toward something that might make you happy (even if you’re not totally sure)?

Here two ideas for steps you can take:

Remember: this move will not be the only decision you ever make. Do not fall into the trap of thinking that once you step in a certain direction, you have to keep moving in that direction for life.

The smartest people find a way to make those paths somewhat related, even if they’re not really related, and you will, too.

And let us know what happens.

11 Lessons from a Year of Full-Time Entrepreneurship