Are Freelancers Happier Than Full-Time Employees?

Self-employment — or freelancing or solopreneurship or consulting or whatever you want to call it — isn’t for everyone. But a new survey from Elance makes it look pretty darn appealing. 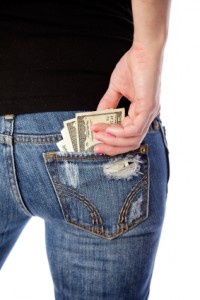 Because I totally keep $100 bills in my back pocket. Oh, and that’s my butt, too.

The average freelancer expects to earn 43 percent MORE next year than they did this year, the survey shows. That’s huge compared to traditional workers, who typically expect a 3 percent raise. (Not sure where Elance got that traditional-worker statistic from, but it sounds about right. Even if it’s not, few traditional workers expect a raise of 43 percent.)

Even better, nearly 70 percent of the freelancers surveyed said they are happier now than they were as a full-time employee — pretty impressive considering how many Americans are unsatisfied with their jobs. And nearly 80 percent said they are more productive as a freelancer than they were when working full time for one employer. That makes sense, since there’s no such thing as “busy work” when you work for yourself.

“In just a few short years, freelancing has gone from a last resort option to a lucrative and fulfilling career,” Fabio Rosati, president and CEO of Elance, said in the release.

Keep in mind that Elance has a dog in this fight, as do most organizations that come out with statistics: the company connects contractors with businesses that want to hire, so they’re at the center of this work revolution. Elance surveyed 3,000 contractors for this report.

Also worth noting: the five types of freelance jobs that are expected to grow the most next year are web programming (of course), mobile apps (another obvious one), graphic and web design, online marketing (hello social media consultants!) and — this is what will probably be of most interest to readers of this blog — CONTENT WRITING.

Because if more companies and organizations are spiffing up their websites, they’re going to need content for that site, right?

I don’t bill myself as a content writer because it sounds hella boring, but that is basically what I do: create interesting, relevant and valuable content for small businesses and help them share it on their blog or social media channels in ways that gain the most traction. If I can take advantage of this growing freelance opportunity, all you writers can, too.

Oh, and one more point about these income stats. You could certainly argue that freelancers expect a significant bump next year because they’re not making as much as they need to make now, and that just because they expect to earn more next year doesn’t mean they will — we could poke all sorts of holes in this data.

But the takeaway is that when you work for yourself, you have tons of potential. If you want to earn more, you work more. (As opposed to most traditional jobs, where working more rarely shows in your paycheck.) You have more potential for earning, for learning and for growing.

And I tend to think that potential — in addition to the autonomy and flexibility freelancers enjoy — is what truly makes us happy.

If you’re a freelancer or consultant, are you happier now than when you worked full time for one employer? If you’re in a traditional job, do you think you’d be happier as a freelancer?

12 Replies to “Are Freelancers Happier Than Full-Time Employees?”

The Biggest Risk in Life