Purpose Won’t Find You Until You Get Started

You’d think getting where you want to be in your career and life would be the big challenging facing most of us. But the truth is, for many 20- and 3o-somethings and even beyond, the challenge is often even more basic: figuring out what the heck it is you want.

Not knowing what you want can be paralyzing. Because you have so much potential, there’s all this pressure to choose the right path, one that has meaning… which often leads to choosing no path at all. We see our indecisiveness and inaction as temporary, but too often it lasts years, and then we risk looking back with regret about what might’ve been.

That’s why if you don’t know what you want, you should guess. Now here’s another layer to add to that conversation, one that comes out of an absolutely AWESOME book that just gained a permanent spot on my motivational bookshelf.

Why Jon Acuff’s START is a must-read

The book’s called Start, and it’s by Jon Acuff, who says there’s no sense in waiting to find your purpose.

Why? Because contrary to popular belief, purpose usually finds you — not the other way around. And it only finds you after you’ve gotten started. 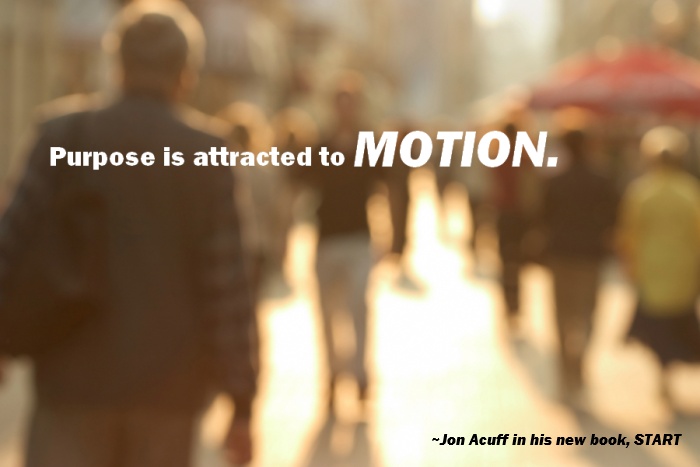 That’s why you should START, Acuff says. Starting is his version of guessing, of taking baby steps. Because purpose won’t find you until you’re in motion, until you’re moving toward what you think you want. That means you have to get going even if you’re unsure of the right direction.