Reporting from the Trenches: Writer’s Colony No. 3

Every September I go to a writer’s colony.

Not because I planned it that way. I just realized this while preparing for my first residency at the Virginia Center for the Creative Arts, known among artists as VCCA. My two weeks there start today. Yup, today.

In September 2009, I spent five weeks at The Hambidge Center, my first artists’ colony experience. (That’s when I fell in love.) I returned there for two weeks in September 2010, at a time when I was feeling lost. And now I’m about to spend much of this September at VCCA.

Two weeks is the minimum stay at VCCA. But when I applied months ago, I still had a day job, and two weeks away was all I could manage.

Each time I go to a writer’s colony, I go out of my way to blog about it. Partly because a lot of you seem to be seeking similar experiences, and partly because there’s really not all that much online about what it’s really like at an artists’ residency. My theory is that’s because the writer, artist and musician types that frequent these colonies don’t spend a lot of time online. 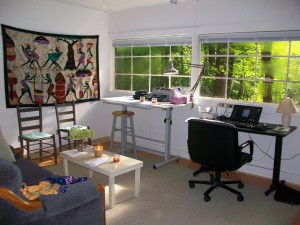 My studio at Hambidge.

I’ll still be blogging — because that helps me process what I experience — so you can still have a dose of me several times a week if you want it.

Finally, a note about how I’m feeling: excited, but also nervous. It’s always nerve-wracking to go to a new place where you don’t know anyone (for me, anyhow). But each writer’s colony I’ve attended so far has helped me grow significantly as a writer and a person while facilitating an awesome bout of productivity, and I have no doubt that this experience will do the same.

Think you might want to attend a writer’s colony? Here are my posts on Hambidge. And one on how to find and apply to artists’ colonies.

6 Replies to “Reporting from the Trenches: Writer’s Colony No. 3”

An Overlooked Benefit to Making a Low Salary